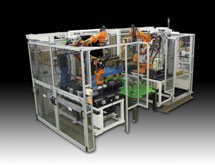 No stranger to recognition, ABCO Automation has earned six “Fast 50” awards – this year marking a third consecutive win  – and was also ranked on the Inc. 5000 list as one of the fastest-growing companies.  To be one of the best in such a highly technical and competitive field, you can be sure there is some major talent working behind the scenes.

That’s exactly the case for this industrial automation manufacturer. Among its 130 employees, approximately 40 are engineers who are creating some of the most sought-after assembly and packaging machines. One of the products the company is most known for is  custom-built bag-in-box filling systems that cut, load and fill bags with liquid at high speed within an accuracy of better than 99 percent. These highly specialized machines sell for between $250,000 and $1 million.