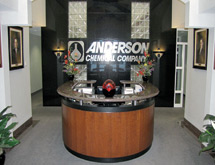 Anderson Chemical Co. is celebrating its 100th anniversary this year, and not only has the business endured for a century, it has re­mained a family owned operation throughout that time, as well. Alfred Anderson emigrated from Sweden and established the company in Litchfield, Minn., in 1911, and from the 1940s to the ’70s, it was his son, Bruce, who managed the operation’s growth. The family’s third generation – Bruce Jr., Terry, Leif, Lindsay and Brett – is now at the helm, and while the family’s ownership has been a strong foundation for the operation, Anderson attributes its place in the industry to much more than that.