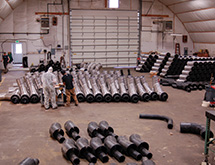 Alaskan winters are some of the toughest on the planet and can be especially harsh to the construction industry. The ground is frozen for roughly half the year, leaving local firms and suppliers with a narrow window to complete projects. But companies can’t shut down while they wait for better weather. During those long winter months, Arctic Insulation & Manufacturing LLC scales back its production of insulted pipes and fittings to 25 percent of its summer workload. The company could skate by with as few as 10 workers during the slow period, but instead, Arctic Insulation continues to pay 22 employees their full-time salaries and benefits.

For President and part-owner Brian Wilkerson, it’s not simply a matter of cutting cost but ensuring those workers are still there when spring arrives. Employees are the company’s most important asset, Wilkerson explains, and Arctic Insulation’s commitment to its workers and its community is one of the driving factors of the manufacturer’s success.