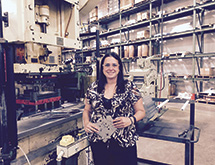 Aro Metal Stamping Company Inc. President Erica Wiegel knows more than a little bit about the manufacturing industry and what it takes to operate a successful business. She spent many hours as a young girl helping out in her father’s company, Wiegel Tool Works, sorting parts.

Wiegel grew up in her father’s company, working in various roles including quality assurance, prototype department, engineering and eventually the front office as a manager. Thanks to the experience she and her brothers had growing up in the industry, Wiegel Tool Works has become a “showpiece” company known for its advanced technology, according to Wiegel.