Back to Profile Gallery > BE Peterson 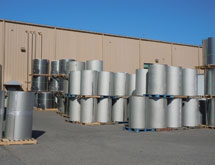 BE Peterson is unlike many of its competitors in the metal fabrication field, and Vice President of Business Development Daniel Szczurko says the reasons why it is different also are the reasons why the company has been a solid presence in the marketplace for more than 75 years. The company was founded by the Peterson family in Massachusetts in 1935, and since that time it has grown into a metal fabricator capable of working with major customers to produce highly complicated components.

Szczurko says the most unique aspect of BE Peterson is how it serves its customer base. Many metal fabricators build components to customers’ specifications on a per-order basis, but BE Peterson works to provide contract-manufacturing services to some clients on a daily basis. The most prominent example of this model is the company’s work for Phillips Medical, for which BE Peterson manufactures most of the metal components for the super-magnets used in MRI machines. Szczurko says this has grown into a significant portion of the company’s business over the years, giving BE Peterson a daily flow of contract manufacturing work to keep it busy.