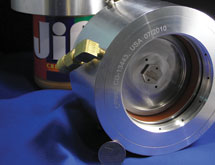 When Henry August Strippelhoff came to America from Germany in 1929, he came equipped with a journeyman’s card in tool and die making after a four-year apprenticeship program. Even though he was starting out during the Great Depression, his determination and dedication to applying his skills allowed him to establish his own business in 1943 after working 12 years for large tool and die manufacturers in Detroit.