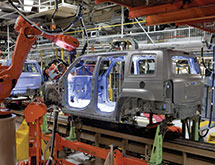 Located in north-central Illinois, about 75 miles from Chicago, the city of Belvidere has a population of about 25,000 residents. It was first settled in 1835 and was given its name because Belvidere means “beautiful to view.” Chrysler Group LLC became a major part of the community’s history when it opened an assembly plant there in 1965. But fast-forward to 2009 when Chrysler filed for bankruptcy, and the town’s outlook was not as beautiful as when it was founded.