Back to Profile Gallery > E1 Dynamics 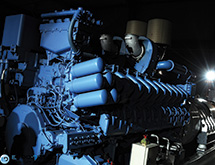 E1 DYNAMICS has made major strides since starting up its operations in the U.S. less than 10 years ago. Its Belgian-based parent company, EURO-DIESEL, has been supplying power protection equipment around the Eastern Hemisphere since 1989. In 2007, the company made the decision to open a North American operation, starting E1 DYNAMICS to bring the technology solutions of EURO-DIESEL to the U.S. and Canadian markets.