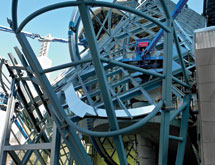 Taking on large and complex projects is a staple of Canada’s Empire Iron Works Ltd. The company has been putting its skilled labor force to work on challenging projects for more than five decades.

Incorporated in 1958 in Winnipeg, Empire Iron Works has spent the past 50-plus years building for industrial, institutional and commercial applications. Today, the company is headquartered in Winnipeg, has all office functions in Edmonton and a shop in Wabamun, Alberta.

“Most of our work is done in Alberta although we have had several projects in British Columbia and a few smaller in the Northwest Territories,” General Manager Andy Boelee says.