Back to Profile Gallery > EMTEQ Inc. 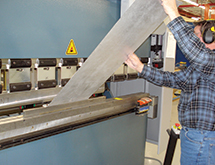 Frequent fliers may not give a second thought to airplane components such as cabin lighting, but it is the name of the game for Wisconsin-based EMTEQ.

EMTEQ was started in 1996 by CEO Jerry Jendusa and Jim Harasha, executive vice president. “It’s a great American story,” COO Mark Ciepluch says. “They borrowed money from friends, banks and took out second mortgages. They started the company with zero revenue and zero products and last year we exceeded $100 million in sales.”

Fifty-five percent of EMTEQ’s business serves executive and regional aircraft OEMs, and the remainder is dedicated to the aftermarket. The OEM market has seen steady growth since the 2007-2008 market crash, Ciepluch, explains. “The aftermarket is still pretty healthy also,” Ciepluch says. “There is still a fair amount of used aircraft on the market, but we have been able to capture our unfair share. We’ve seen consistent and steady growth.”