Back to Profile Gallery > Everglades Boats 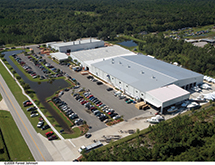 Having everything where it needs to be is a tenet of lean manufacturing, and doing so is easiest in a facility specially designed for manufacturing a specific product. That was the way the 111,000-square-foot factory for manufacturing Everglades Boats was designed – from scratch.

“This plant was built in 1999, and we added on in 2006,” Vice President of Sales Bryan Harris recalls. “It was built to be a boat plant.” Founder and CEO Bob Dougherty has been building boats for 58 years for several leading companies and founded Everglades Boats in 1999. The company is celebrating its 15th anniversary in 2014.

“He knew what he wanted this factory to be like,” Harris says. “It was built to do what it does. A lot of boat manufacturers go into existing facilities and kind of make them work, but this was built to have the flow of a boat factory.”