Back to Profile Gallery > Every Watt Matters 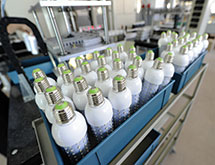 In 2008, at a time when many manufacturers were either closing their doors or severely reorganizing, George Blackstone saw an opportunity. Blackstone, a 35-year-plus manufacturing industry veteran, at the time had been involved in a resort development project that, like many commercial developments, had stalled as a result of the recession.

One aspect of the project, however, inspired him to begin an endeavor that he anticipates will reach $100 million in revenue within the next few years.

“I was previously involved in developing a 400-acre mixed use resort community that incorporated many sustainability features,” he says, noting the resort was designed to attain the U.S. Green Building Council’s LEED Platinum status. “The resort was never built, but during the investigation into sustainability features, LED lighting stood out as a very effective way to make a difference in energy savings. Based on that research, I decided to make a business out of it.”