Back to Profile Gallery > Experior Laboratories 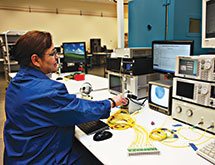 When it was founded in 2003, Experior Laboratories began its journey as an independent, third-party testing, design verification and qualification laboratory. Originally known as Experior Photonics, its initial focus was on testing fiber-optic components. In 2010, the company rebranded as it expanded its focus to include the electrical connector and environmental testing markets.

Today, Experior Labs provides services to component manufacturers, military contractors, integrators and system providers in the telecom, datacom, military, aerospace and industrial markets. The company is headquartered in Southern California where it has 15,000 square feet of space and around 30 employees. Experior Labs is in the midst of doubling the size of its facility to handle more volume.