Back to Profile Gallery > Genesis Engineering 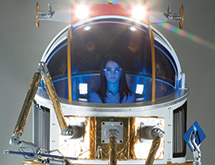 Established in 1993, Genesis Engineering (GES) has been a major contributor to some of the most exciting advances in aerospace. For more than 20 years, the company has excelled in technology development and commercialization, providing solutions to federal government programs, as well as domestic and international private businesses. As a primary supplier to NASA, GES has helped launch 150 critical parts for the Hubble Space Telescope into orbit with its sophisticated protective enclosures. GES engineers also participate in ongoing projects for NASA’s Solar Dynamic Observatory, the Composite Crew Module and the James Webb Space Telescope, to name a few.

As proof that GES is one of the best in its class, the company has two impressive awards in its portfolio. It was recognized by the Prince Georges TECH Council in 2006, winning the Small Business Award. More recently, NASA’s office of Small Business Programs awarded Genesis as GSFC’s Small Business Prime Contractor of the Year in 2011. The engineering firm also holds an ISO 9001 certification and manages three facilities.