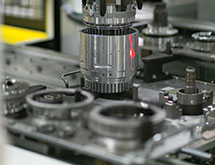 GM Toledo Transmission has built a long-standing reputation for quality, productivity and performance over the past century and maintains it today through a disciplined manufacturing system. “We are recognized through an internal assessment by GM as being one of four plants to receive its Built-In Quality Level Four Award because of our discipline and the involvement of our people,” Plant manager Joe Choate says. “The Toledo facility is one of the highest assessed plants in the corporation.”

The Toledo, Ohio-based plant was founded in 1916 to produce truck transfer cases and transmissions for four- and six-wheel-drive military trucks throughout World War I. Today, the team manufactures and assembles GM’s front- and rear-wheel-drive transmissions in its two-million-square-foot facility that sits on 151 acres. “We are the largest transmission manufacturer for GM, making twice the products other plants make,” Choate says.