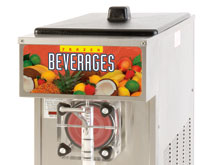 When a consumer orders a favorite coffee drink at their local café, chances are that drink is being prepared with a Grindmaster-Cecilware product.

The company is headquartered in Louisville, Ky., and is comprised of four different companies: Grindmaster Corp., Cecilware Corp., Crathco and American Metal Ware. Grindmaster-Cecilware was formed in 2009 through the merger of the two companies and continues to be the industry leader in beverage dispensing equipment, but also operates a small division of foodservice equipment, CEO Nestor Ibrahim says. “We have a very long history and strong brand,” he adds. “We are four very strong, established brands that have created synergy and critical mass in the marketplace.”