Back to Profile Gallery > Hussman Corp. 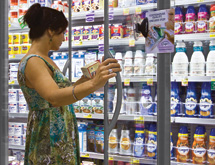 According to the Food Marketing Institute, the grocery business is a $602 billion industry in the United States. With shoppers making an average of two visits per week, there is no shortage of customers, and for customers, there is no shortage of options. Progressive Grocer magazine says there are more than 37,000 supermarkets in the nation, each grossing more than $2 million in annual sales. That doesn’t include neighborhood markets, warehouse stores, convenience stores and drug and dollar stores — all competing for the same dollars. In a competitive market where customers abound, but profits only average 1 to 3 percent, grocery stores have to make sure that each decision positively affects the bottom line, and those decisions concern way more than the average shopper knows.