Back to Profile Gallery > Industrial Electric Wire and Cable 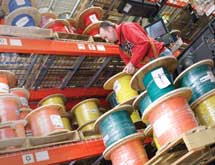 Industrial Electric Wire and Cable (IEWC) – a forward moving company – has transformed itself. Primarily a domestic stocking distributor of wire and cable at the start of 2000 with offices in Milwaukee; Cleveland; Greenville, S.C., Dallas; and Phoenix – the company says it “wired itself for success” and became an industry favorite. Throughout the last decade, initiatives began to push the company to the next level of sustainable growth by reorganizing its sales teams to include integrated inside support staff and dedicated feet on the street in every major market in North America.