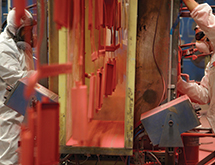 Powder coating does more than give parts a clean, finished look, according to Inland Powder Coating CEO David Flatten. He says it also serves to protect those parts against corrosion and other external dangers. “Powder coating looks like paint but acts like armor,” Flatten says.

The company is now in its 31st year of business. The job shop was founded by Flatten’s father-in-law in 1983, with Flatten assuming control in 1984. The company’s executives all have more than 20 years of experience and operate with honesty and integrity, Flatten says. One explanation for the company’s success is that it began operating at the onset of the powder coating industry and rode the coattails of the sector’s growth.

“We got in at the beginning of the commercially viable powder coating industry,” Flatten explains. “By doing so, it gave us a big advantage to grow with the growth of powder coating. There was double-digit growth in the ’80s and ’90s, and we established ourselves very well in the Southern California region with few competitors.”