Back to Profile Gallery > Inovonics 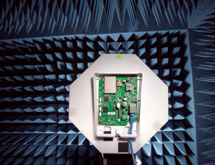 For many companies, outsourcing is an extremely undesirable concept that brings to mind the loss of jobs and product quality in the name of cost savings. Typically, manufacturers only look to it as a last resort in a poor economy, with many later regretting the decision regardless of the positive effect on their bottom line.

Louisville, Colo.-based Inovonics made the decision in 2008 to contract out its manufacturing operations for reasons similar to those of many other companies. The wireless sensor, network and systems manufacturer, founded in the mid-1980s, faced capacity restraints that would have required a heavy investment in new equipment, which it wasn’t willing to make during a poor market.