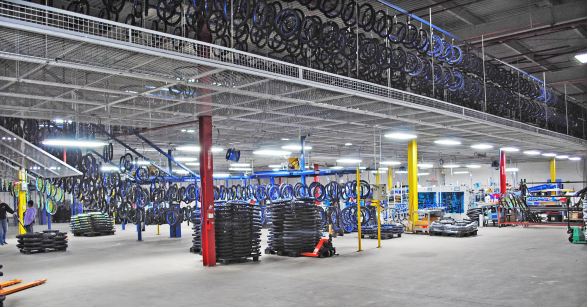 Kent International’s decision to bring some production to the United States is helping them grow their business. By Chris Kelsch

But that has changed drastically in the past few years. In 2013, Walmart, which accounts for roughly half of all U.S. bike sales, and is one of Kent’s primary customers, pushed its “Buy America” program, encouraging suppliers to source from within the United States.

That, plus rising manufacturing costs in China and Taiwan, forced Kamler to look at more economical options. Fortunately, he found a partner in South Carolina Governor Nikki Haley, who convinced him to set up shop in Manning, S.C. The facility was ideal, given its proximity to the state’s ports as well as South Carolina’s rich heritage in manufacturing; BMW, Honda and Lockheed have major facilities there.

The Kent facility, which opened in 2014, assembled 300,000 bikes in 2016 with plans for 2017 of 450,000. Most of the parts are sourced from Asia. The company presently employs 115 workers with plans to increase that in each of the next five years. “I couldn?t be more pleased,” Kamler says. “I wanted to be in a right-to-work state, and the workers in South Carolina have been terrific.”

Eventually, Kamler would like to expand capabilities within the United States to include the manufacturing of frames, forks, and handlebars. Kent has begun the process of setting up a modern powder-coating facility of its own in South Carolina. “By being able to coat our own products domestically, it saves us time and money in assembling the final product,” Kamler explains. “It is also a necessary step in order to begin frame and fork production, which is scheduled for the latter part of 2018.” 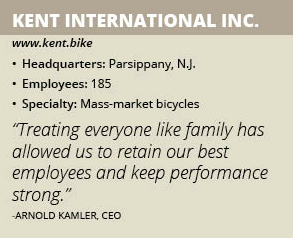 But manufacturing isn’t solely about technology and real estate. “We want to create an environment where everyone enjoys coming to work every day,” Kamler says. “We also want people to feel free to have fun and be creative.” Kamler personally greets each of the employees each day by name, and makes an effort to let them know they are appreciated. As for being creative, he has also left the task of organizing semi-annual theme parties to his wife, Gayle.

In addition, “I tell everyone I don?t want to see them after 5:30,” Kamler notes. “Go home and be with your families. That kind of family atmosphere has led to tremendous loyalty, as many of Kent’s employees have been with the company 15 or 20 years.”

The philosophy has served the company well, particularly in its sales and marketing branch, which is still located in New Jersey.

Kent remains one of the nation’s largest mass-market bike manufacturers, with 2016 revenues of $220 million. For 2017, Kamler expects that figure to rise to $250 million. The company excels at producing bikes that typically sell for $69 to $220, at outlets such as Walmart, Target, Toys ‘R’ Us and Amazon. More recently, Kent has made inroads with independent bike dealers.

The company has seen amazing growth since its humble origins. Kent’s roots began in 1909, when Kamler’s grandfather started his own bike shop in the Lower East side of New York City. The family moved in 1912 to Newark, N.J., and opened a store, which was appropriately called “Kamler Cyclery.” Kamler’s father started his own company called Philkam Cycle in 1947. The company changed its name to Kent International in 1953 and hasn’t looked back since.

Of course with growth there are also unique challenges. “Our biggest problem right now is supply chain,” Kamler says. “We definitely need to get a lot leaner.” Indeed, the company still sources all of its components from China, and in recent years formed a partnership with Shanghai General Sports, which currently owns 49 percent of Kent. But having assembly in the United States has allowed Kent to save on manufacturing costs, as well as keeping shipping costs low.

As for lean initiatives, Kamler would like to use more automation. “The key is, we don’t want to use automation to supplant the worker,” he notes. “We would rather use automation as a way to supplement the worker to increase efficiency.” The South Carolina facility is currently 204,000 square feet.

Although Kamler has relinquished some of his duties – his son Scott Kamler is now the president – he doesn’t envision himself, or the company, slowing down. This is incredible, considering he never figured he would last this long. “When my Dad first asked me to join the company in June of 1972,” he recalls, “I figured I would try it for a few years and if I didn’t like it, I could always go back into sales and marketing, which is what I studied.” It?s been nearly 45 years since, and he isn’t headed back.