Back to Profile Gallery > MagneMotion 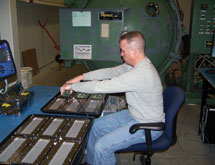 Travel of products through assembly lines has become much more sophisticated than the moving belts and chains used to pull products through factories. Now, instead of an unyielding movement of products at the same speed past assembly stations, MagneMotion’s systems can provide more independent travel. It’s the difference between a 20-car train being pulled by an engine versus each car of the train being able to travel independently in either direction under its own power.