Back to Profile Gallery > Milton Industries 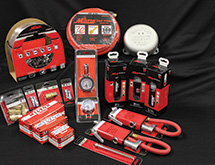 In fact, it’s difficult to identify a segment of the company that is not changing. From systems to staff, facilities to philosophy, the Chicago-based company is undergoing some significant alterations. “Basically, everything has been changed,” Carlson says.

Milton Industries manufacturers pneumatic parts for more than 1,000 customers in the automotive, heavy duty, industrial, farm and agriculture, and government sectors. Much of its government business is with the military. But changes were introduced in 2012 when the company, which was founded in 1943, was acquired by private investors.