Back to Profile Gallery > Mosebach Manufacturing 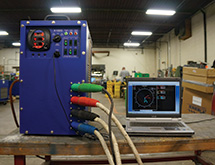 Mosebach Manufacturing has gone through a lot of changes since its inception by Karl Mosebach in 1924. Originally it supplied electrical gear for coal mines in Pennsylvania and West Virginia. Several decades later, the company was split into two entities, Mosebach Electric Supply and Mosebach Manufacturing. The latter continued to grow and was sold in 2006 to Telema, an Italian family owned business that is very invested in technology and developing new products, while Mosebach Electric was sold in 1990 to Consolidated Electrical Distributors and is no longer tied to the original company.

Mosebach Manufacturing’s specialty for more than 40 years has been designing and building dynamic braking grids and resistors, which are used in locomotives for all the large railroad companies, as well as rail distribution companies. These resistors slow down locomotives without using the braking pads. This puts the engine’s energy into Mosebach’s resistors rather than forcing the wheels to turn, which slows the locomotive without using brakes more quickly and cheaply on downward slopes. Additionally, the company sells a number of replacement grids for resistors that have burned up.