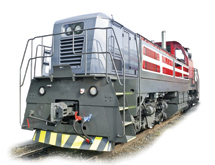 With more than 40 years of experience under its belt and a widespread reputation for quality and service, it’s easy to see why MotivePower Inc. is an industry leader in the design, manufacturing and re-manufacturing of diesel-electric locomotives.

Since 1972, the company – established as the rail systems group of manufacturer Morrison Knudsen and formerly known as Boise Locomotive Company – has successfully manufactured and delivered more than 2,500 locomotives from its manufacturing facility in Boise, Idaho. MotivePower is a subsidiary of Wabtec, which was formed following the merger of its parent MotivePower Industries Corp. with Westinghouse Air Brake Company in 1999.