Back to Profile Gallery > Pacesetter 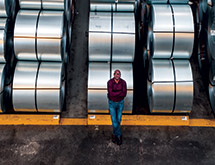 Pacesetter is a family owned business with humble beginnings. Steve Leebow, the founder, worked in his family’s steel distribution center until he started his own company in Atlanta, Ga. in 1977. He successfully and quickly grew Pacesetter to be known in the market as a leading steel supplier. Now, Aviva Leebow Wolmer, his daughter, who was appointed CEO in September 2014, runs the company while Steve remains immersed within the business as Pacesetter’s COO.