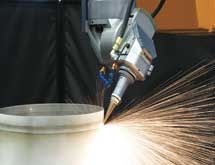 A lot has changed in the past 30 years for Prima Power Laserdyne, which, until April of this year, was known as PRIMA North America Inc.’s Laserdyne Systems Division. New markets, new customers, new leadership and a new parent corporation all have played a hand in the Champlin, Minn.-based company’s evolution. One thing that hasn’t changed, according to President Terry VanderWert, is its commitment to building quality, high-performance industrial laser systems for cutting, drilling and welding.