Back to Profile Gallery > Saf-T-Cart 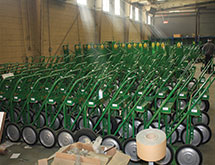 After nearly three decades, Saf-T-Cart’s name has become synonymous with its product. “When you think of a cylinder cart, you think of a Saf-T-Cart,” Controller Jim Herring says, noting that its products are used by “most welding distributors throughout the country.”

In 1986, CEO Jimmy Walker had the idea for a cylinder cart, but he could not get anyone to build it. So Walker started buying bending and forming equipment at auctions and began building the carts on his own.