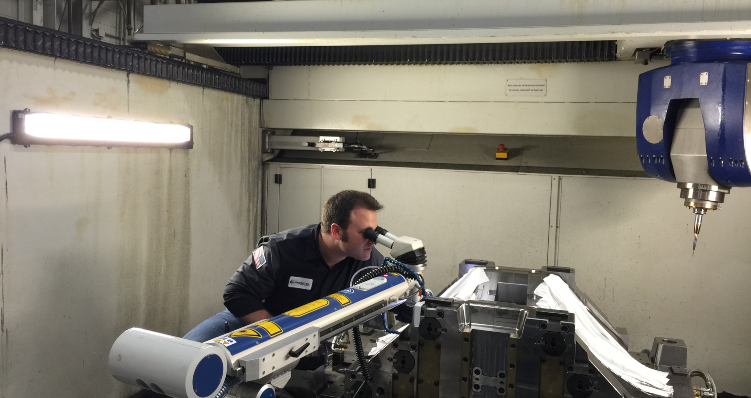 Although laser welding has been a preferred method for joining and repairing materials in Europe for many years, it’s now picking up speed in the United States as manufacturers begin to realize its benefits over conventional welding methods. 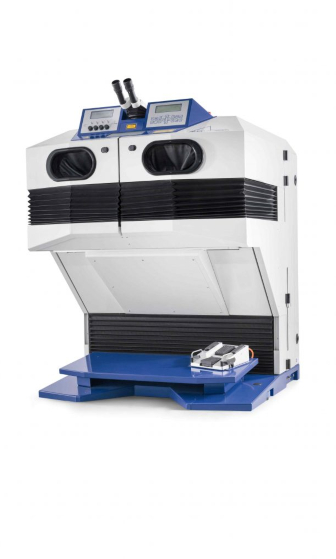 of Alpha Laser U.S., which is the North American sales distributor for ALPHA LASER GmbH, a pioneer in the field of mobile laser welding and other high-quality laser welding devices based in Puchheim, Germany.

Alpha Laser is known for continually exploring new applications for laser welding in joining and repairing materials and as a trendsetter in innovation for new laser welding systems.

“We have an immense knowledge of how to use the equipment and its capabilities to assist customers who want to use that technology or bring it inhouse,” Learn says. “And Alpha Laser equipment is the Rolls-Royce of laser welders. Nobody can execute the weld like we do and our equipment is the fastest equipment on the market.”

The Alpha Advantage
Laser welders are created using a gain medium and something that excites the medium to create the laser, such as a flash lamp or LEDs. The gain medium is the material that determines the wavelength of the laser and other properties. In the case of Alpha Lasers, the gain medium is a YAG crystal or fiber optic.

“YAG and fiber optic lasers have the ability to be pulsed,” Learn says. “And the benefit of using a pulse laser is that you have infinite control over your heat.”

When the lasers like this are created, the beam is guided to the workpiece through a set of mirrors, allowing laser welders to have a very high peak power, while having a very low overall heat input. Laser welders use this power to melt the base metal of the workpiece and filler wire in milliseconds, without adding extreme heat to the area surrounding the weld, as traditional welding would.

Since laser welders pulse instead of running continuously, the heat input is so small that most welds are cool to the touch right after completion. With conventional welding methods – known as Tungsten Inert Gas (TIG) or Gas Tungsten Arc Welding (GTAW) – welded materials become extremely hot and require cooling afterward at a slow rate so the base metal doesn’t damage itself.

In addition, the heat affected zone (HAZ) of the material being welded with conventional methods can be as large as .150” while the normal range for a pulsed laser is .008-.012” – making the laser welder cause very little damage.

“With conventional welding, they are doing much more permanent damage to the original workpiece,” Learn says. “By being able to pulse and control the heat, we don’t soften the Rockwell in an area where it doesn’t need to be.”

Accuracy and Speed
Laser welders can weld a spot down to a few thousandths of an inch, while a conventional welding torch cannot normally go below a .040” tungsten tip. This accuracy also makes the laser able to weld areas or features that are traditionally considered nonweldable.

“A lot of the CPM (crucible powdered metal) alloys materials are extremely difficult to weld using conventional welding but can be easily welded with a laser,” Learn says. “We’re always finding new alloys that we can weld that are difficult for conventional welders.”

Furthermore, laser welding is faster than conventional welding, which requires a workpiece to be preheated prior to welding and cooled after welding. “With the laser weld, most of the time we can put our hand on the workpiece immediately after welding,” Learns says.

Alpha Laser welding systems have CNC capabilities which allow production and high-volume welding processes to be completed quickly. They can also apply material much faster than other lasers – while maintaining the laser welding benefits.

“Alpha produces its lasers inhouse,” Learn says. “Everybody else stops at 300 watts but Alpha goes to 500 watts, which makes it twice as fast.” 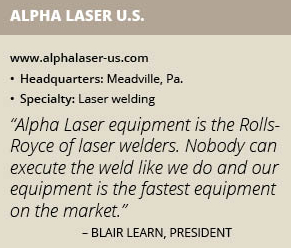 Alpha Laser’s most popular products include the ALM Laser Welder and the ALFlak laser welder. The ALM features extremely short set up times, flexibility and mobility – allowing repair at any location of a vast range of machine components, pressing tools and large molds.

“Since it can execute weld repairs onsite, our customers don’t have to disassemble large pieces of equipment and send it out for repairs,” Learn says.

Both the ALFlak and ALM fit into a van. The ALFlak is available in two versions: with a self-propelled caterpillar track or a model that can be moved manually. Another one of the ALFlak’s benefits is that its arm can effortlessly reach its welding position, even in deep or complex molds.

For industries that don’t want to use an open laser system, Alpha Laser offers products like the ALV Laser Welder and the ALW seated workplace laser welder.

“They have the same characteristics but they are in a closed cabinet,” Learn says. “They’re designed for people doing medical or smaller component work or welding among other workers.”

The ALV is compact and can be set up in any work area. It’s best suited for use in micro and deposition welding in tool and mold manufacturing, in sensor production and medical technology.

“I have been welding with lasers for 25 years,” Learn says. “It was not accepted practice for a long time because the cost was so high. But the prices of lasers have come down – and they are growing in popularity.”