A vehicle for change

Reimagining the future is all in a day’s work for Arcimoto, the electric vehicle company with a mission to catalyze the shift to more sustainable modes of transport

Mark Frohnmayer might be Arcimoto’s Founder and CEO, but first and foremost, he sees himself as a customer. “I started the company because I wanted the product it would eventually come to build,” he declares. “Arcimoto was born of a felt need that I had for getting around my local area. I was the prototype customer.”

The journey began in 2007 when Mark went in search of a vehicle for everyday driving. Concerned about the growing proliferation of expensive, polluting, oversized automobiles used to travel short distances, Mark was not looking for a car, but something more attuned to the trips people take on a regular basis. The criteria he set 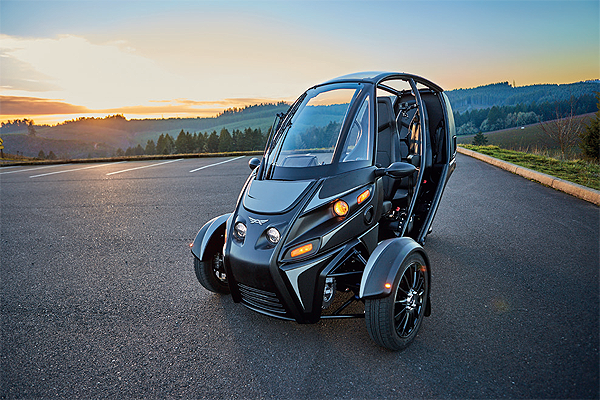 was simple – the vehicle needed to be lightweight, electric, and capable of transporting one or two people, and the things they needed to take with them, over a short distance to their destination. Mark’s quest ended in disappointment.

“I couldn’t find the vehicle I was looking for,” he says. “It just simply did not exist. The closest I came was a three-wheeled kit vehicle I saw at a parade in my hometown. It had two wheels at the front, one wheel at the back, and it was a lightbulb moment for me. I suddenly realized, for the first time in my life, that there is a giant gap between the motorcycle and the car. If you live in Europe or South East Asia, there is usually a lot more filling that gap, but in the US market, there is an ever-widening disparity between the two-wheeled motorized scooter and the large four-wheeled car.”

Following this epiphany, Mark decided to act. He ordered a kit and convinced some friends to help him put it together, but the vehicle still wasn’t right. Though the basic concept of three wheels, motorcycle class efficiency, and a small environmental footprint ticked a number of boxes, Mark wanted more. He needed a vehicle that was faster, that could carry an extra passenger, and that offered a superior ride feel. Unsatisfied with his existing options, Mark concluded that sometimes, if you want something done, it’s best to do it yourself.

“Arcimoto became a company in late 2007 and we actually went through eight distinct design and engineering iterations before we arrived at the platform we ultimately developed,” Mark reveals. “Over the span of the first seven years, we built seven distinct prototypes, all in the three-wheeled Arcimotovehicle space, and where we really felt like we achieved victory was on number eight. That is the platform we first conceived in late 2014. We put it on the road in 2015 in the form of looks-like, works-like prototypes. The prototypes became what is now known as the Fun Utility Vehicle (FUV), our flagship consumer product. It is a unique way for an individual to have a much lighter footprint for getting around town. As the name suggests, it is incredibly fun to drive and very useful for day-to-day trips.”

With a top speed of 75 miles per hour, and up to 102 miles per charge, the FUV is a fully electric two-seater, sustainable transport solution. Built for fun, the vehicle offers a panoramic roof, removable West Coast doors, heated seats, and lockable storage. Highway legal in all 50 US states, a base model FUV will soon be available for just $11,900, meaning more consumers will be able to access revolutionary technology at an affordable price. 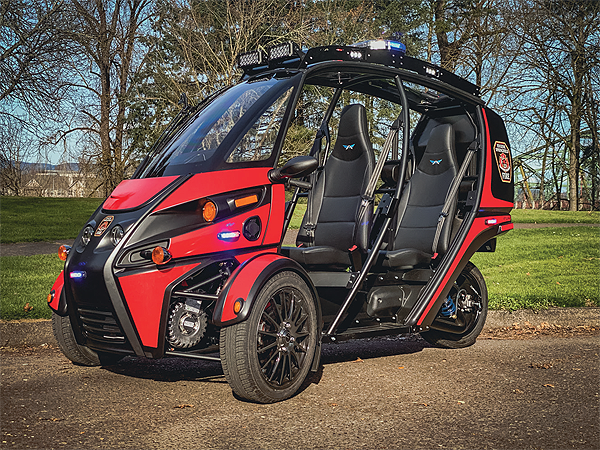 Product portfolio
Using the very same platform as the FUV, Arcimoto recently added two additional products to its portfolio. The first is the Rapid Responder, a lightweight, maneuverable transport solution designed to get first responders to the scene of incidents as quickly as possible. The vehicle is already being trialed in Oregon by the Eugene Springfield Fire Department.

“We took the fundamentals of the FUV and applied those benefits to emergency response,” Mark explains. “The Eugene Springfield Fire Department is our first pilot for the Rapid Responder and one of the things they like is that they can take it on bike paths. We have hundreds of miles of bike paths in Eugene and Springfield, so that’s an advantage that can be very useful in an emergency.

“The Rapid Responder’s vast capabilities extend its effectiveness beyond the realm of emergency medical services to law enforcement, campus security, stadiums, and dense metropolitan areas where full-size ambulances can get stuck in traffic. The vehicle is a viable transport alternative in all these situations.”

The third new product Arcimoto has announced is the Deliverator, a next-generation, last-mile delivery vehicle that can improve delivery times, reduce maintenance, and ultimately, increase revenue. Suitable for transporting a variety of goods, from parcels to takeaway food, the Deliverator is a general-purpose fleet utility vehicle with over 23 cubic feet of storage.

“The FUV, Rapid Responder, and Deliverator represent our core three-product offering, but we are not done yet with the full range of the Arcimoto platform,” Mark proclaims. “We have additional products on the drawing board, but right now, we are very focused on getting our first three vehicles out into the market and building the scale of production on what we have announced so far.

“Now that we have around 100 vehicles out there in the field, we are looking to our early customers and asking them about what works, what doesn’t work, and what they would like us to add in order to make their vehicle as effective as possible. Getting feedback from real customers is a really critical part of the development process for us because we want to continuously improve our product for the broader marketplace. Our biggest challenge at the moment though is finding a way to increase our production scale, while reducing cost.”

Green credentials
Arcimoto’s manufacturing plant in Oregon is primarily focused around the automated manufacture of parts, followed by the lean assembly of the company’s final vehicles. When the site was first constructed, the firm decided to vertically integrate the majority of its metals production, meaning the facility is able to take raw tube and sheet steel through to finished parts for the chassis, suspension, and cage of Arcimoto products. Of course, as the firm attempts to increase the scale of its production, it will likely be presented with a variety of manufacturing choices and challenges.

“In the coming months, we will have to ask ourselves, how are we going to increase the number of vehicles we’re moving through the production process?” Mark suggests. “More than likely, we will have to replicate some of the automated manufacturing cells we have in place, as well as think about additional components we could vertically integrate within our own manufacturing footprint. This could include materials like plastics for the body panels, or coating processes for the metal parts in terms of electro dipping the frames.

“Fundamentally, when it comes to automation, we ask, what is the low-hanging fruit? What should be done immediately by robots and then what can be done by hand? As we continue to scale up, we will no doubt see additional opportunities for automation all the way up the production stack.”

One thing that will remain the same for Arcimoto is the company’s commitment to the green agenda. Environmental efficiency has always been one of the company’s core values, and in the near future, Mark and his team plan to carry out a deeper inspection into Arcimoto’s supply chain, as well as a life cycle sustainability analysis of every part that goes into its vehicles. It is indicative of the drive for continuous improvement that is set to power the company to future success.

“I think we have got to a point where we’ve got the initial stake in the ground and now it’s just about improving on every dimension of our operation,” Mark asserts. “We are dedicated to improving environmental efficiency, improving driving efficiency, improving cost, and improving customer experience. Our initial stated goal was to produce a vehicle that is 230 miles per gallon equivalent. We launched with a vehicle that was 173.7 miles per gallon equivalent for city driving, which I think is a remarkable accomplishment, but we still see room for improvement.

“After that, the next step is to look at new business models that can drive growth. We want to understand what a franchise model might look like for tourist destinations, for the gig economy, and eventually, for an autonomous fleet. We believe the autonomous vehicle world should operate on a much more human scale. The real win for autonomy would be personalized mass transit – the ability to get in a small-form vehicle and have it take you where you want to go, sharing the road with other modes of active transport, like bicycles and scooters. These are all things that we’re going to be developing in the coming months and years.”