Some companies place an emphasis on manufacturing products quickly and cheaply, but not Bonset America Corp. “We find that our customers are not willing to sacrifice quality for cheap products and services,” Director of Sales Karl Yancey says.

The company, which manufactures heat-shrinkable films for packaging and labeling applications, has a strong record of meeting its clients’ expectations of products delivered on time without any quality issues. “Those have never been an issue for us,” Yancey asserts.

Based in Browns Summit, N.C., Bonset manufactures its high-quality films for clients in labeling and packaging industry. The company, which broke ground on its first location in 1989, represents the first U.S. venture of C.I. Kasei Co. Ltd., based in Tokyo.

“In the beginning, their management was adamant that it would not be a completely Japanese management system or a completely American system,” Yancey explains. “It would be the best of both worlds.”

Bonset reflects its Japanese heritage with its high standards, while its creative management embodies the American side. “[Those have] been the basis for the company going forward,” he says.

Today, Bonset operates plants in both North Carolina and Uruguay. “We are definitely a leader in our market,” Yancey says, noting that the company focuses strictly on heat-shrinkable films, unlike competitors that manufacture other products.

“That’s the focus of our investment,” he says. “In the United States, we are the largest shrink film manufacturer, and with our parent company, we are close to being No. 1 in the world.”

Bonset is coping with market changes that include cost issues, Yancey says. “As the market grows, your customers ask you to be more competitive in your pricing,” he says. “The way you handle that is to be more efficient in your manufacturing process.”

The company, he notes, makes sure it stays efficient by constantly evaluating its production procedures and equipment. “We look for low-hanging fruit and high-hanging fruit,” he says. 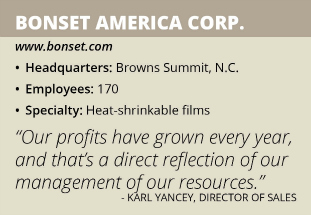 Bonset also continuously trains its workers on its quality expectations. “New employees go through the training process both in the classroom and on the job,” Yancey says.

They are also taught how to document each job, which makes things easier for Bonset if the employees leave the company. With those documents, “It’s easier to retrain those others without having any hiccups,” he says.

“That’s our philosophy,” he says, noting that Bonset looks at the best ways that it can use lean and Six Sigma practices. “If that’s not in your daily manufacturing planning, you’re not using [lean well].”

Another benefit of our Japanese-American corporate culture is a robust R&D division.  With a large department in the United States and in close cooperation with its parent company in Japan, Bonset is constantly developing new products to meet its customer’s needs. This is key in manufacturing for market support and long-term business success.

Yancey joined Bonset 26 years ago and praises the firm’s growth. “This company started with two production lines and we now have seven,” he says, noting that he is proud of how the company has opened a new facility in Uruguay.

“That says a lot for us,” he says, noting that Bonset has never suffered a loss. “Our profits have grown every year, and that’s a direct reflection of our management of our resources.”

Bonset will carefully consider its next investment opportunity as it goes forward, Yancey says. “We’re thinking about where it’s going to be,” he says, noting that it may include the addition of a new production line.