Boone Center Inc. (BCI) is driven to be an efficient and cost-effective co-packer for companies looking for an outsourced solution to their business needs while fulfilling its social mission to provide jobs and opportunities for adults with disabilities. “We are a real co-packing, production and manufacturing facility that will do $20 million in revenue this year,” CEO Tony Spielberg says. “Most customers we have done work with in the past say we outperform our competitors in quality and production. I would put our workforce up against any of our competition.”

Margaret Holmes and Jane Crider founded the St. Peters, Mo.-based company nearly 60 years ago as a home-based candle shop with a mission to employ adults with disabilities. “They started this business with just one employee,” Spielberg says. “The support and response they received in the community strengthened their belief that everyone, regardless of ability, had the right and deserved the chance to find fulfillment through work.”

By the mid ’70s, BCI employed 30 adults with disabilities and transitioned into a more industrial environment with subcontract work in light assembly and hand packing. The company continued to grow and in 1990 purchased its first automated equipment. Today, BCI employs 300 adults with disabilities, operates two facilities in Missouri and has about 100 staff members. “Over the last two to three years, we have grown $5 million in annual revenue and doubled our production capabilities,” Spielberg notes. “Within the next month we’ll be operating 20 lines.”

People and Programs
“This population gets overlooked so much in the workforce,” Spielberg says. “We hire adults with disabilities and can’t say enough about our people who work harder and smarter than so many others. We continue to grow our workforce from those looking for these opportunities to make their mark. That’s how we grow.”

BCI’s employee support specialists (ESS) start with hands-on interviews where new hires are trained and evaluated on three different production jobs, to find which is best suited to their abilities. The specialists’ goal is to determine where each employee would be the most successful. “As our employees become more familiar with their project, they are becoming more efficient and catching defects,” Spielberg explains. “As their skills advance, they can move up and get more opportunities.”

Every six months on the job, the employee sets a new employment goal and ESS creates a plan to help them achieve it. “When someone excels here at BCI under our Organizational Employment Services program, they may choose a new goal of working out in the competitive work market with less support,” Program Manager Cat Woerner says. “In that case they would be evaluated, coached and placed for employment under our Community Employment Services program.”

As employees age, BCI’s ESS team reevaluates their positions to ensure they are still as successful and productive as they choose to be. “Typically, in manufacturing it’s black and white – if you can’t perform see you later,” Spielberg says. “We have great partners and put people where they will be successful. That model in manufacturing could be applied anywhere.” 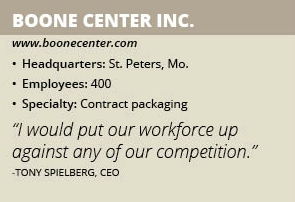 Positive Energy
The culture at BCI is positive and upbeat, COO Jack Guthrie says. “When you walk out on the floor, everyone is smiling and proud of what they do no matter what the job is from putting nail polish remover pads in boxes to building mouse traps,” he adds. “During our factory tours, our employees will call each person over because they want to personally show them what they do.”

“I don’t know where the energy comes from,” Spielberg says. “After lunch, they are all lined up ready to go back onto the floor. They want to go back because they enjoy what they are doing. I challenge you to find any other place where workers come in and practically run to their lines.”

BCI facilities are well lit, clean and conducive to drawing people in, but Spielberg says the motivation for employees may also come from a desire to prove people wrong. “If everyone thinks they are going to fail, they come in wanting to prove them wrong,” Spielberg says. “They have been told they won’t be able to have a productive career in manufacturing, so we don’t need to provide much more motivation than they already have. Looking at the numbers they put out on a daily basis, we do everything with metrics so they know their numbers and it’s really self-motivating.”

Willing to Learn
BCI’s focuses on continuous improvement through lean practices. “We look at removing some of the waste and making it easier for our employees to do their jobs,” Guthrie says. “We have bulletin boards that show our employees what they need to do on an hourly basis to meet their goal at the end of the day.”

Although a majority of BCI’s work is through repeat customers’ orders, the company does see product line changes. “Our employees are open to doing new things and willing and more than able to learn,” Guthrie says. “Whenever we change or add a line, the ESS team and production supervisors work together to make sure the right employees are put in place. Then we teach them exactly what they need to do in order to be successful. And we do all this as efficiently as possible so we’re not disrupting production.”

Because everyone at BCI values quality, the company relies on its quality assurance department to ensure the technical specs for each job are accurate. Supervisors, production managers and quality auditors are also on the floor to ensure product quality.

“The unique thing that we do, which you probably normally wouldn’t see, is ‘catch of the day,’” Spielberg says. “If an employee catches something that could be a defect in a spring, bag or date code, we take about 30 seconds to one minute to acknowledge them, from which applause erupts and creates this excited environment. In terms of quality, that is such a focus here and one of the ways we ensure that is by making sure we praise the people who find the issues.”

Moving forward, BCI plans to continue to focus on continuous improvement through lean principles and adding automation to complement its employees. The company strives to implement additional ways to become a more value-added resource for its customers. “Our vision is to develop the business side in order to keep the social side robust and keep it going,” Guthrie says.