Skip to content
You are here:Home » Breiner Non-Metallics
Aerospace 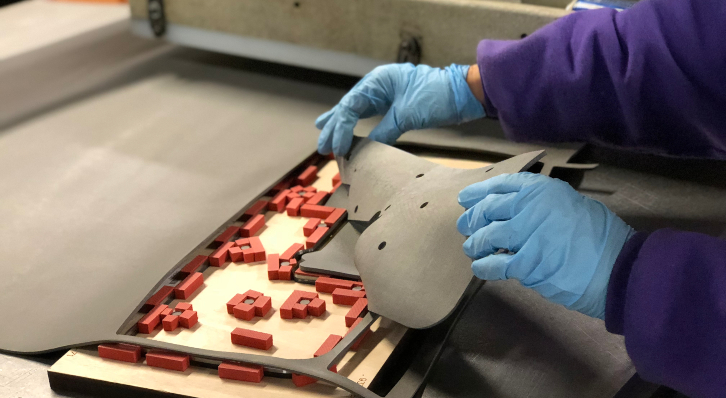 They’re timeless components that have been relied on by important machinery, advanced equipment and other critical products for decades, but rubber gaskets, non-asbestos seals and similar parts aren’t really ones to hog the spotlight.

Joe Lucas, president of Breiner Non-Metallics, is just fine with that.

“It’s definitely a behind-the-scenes kind of thing. We’re never going to be out in front and that’s OK,” Lucas says. “We’re the next layer down, keeping the water out, the air out, the dust out and ensuring other things are working properly.”

Located just outside Indianapolis, Breiner has been die cutting non-metallic materials for Midwest manufacturers and worldwide applications since 1946. While most commonly associated 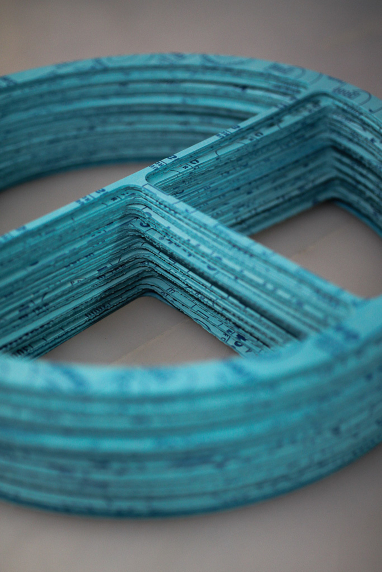 alongside plumbing, tanker, pumping and filtration equipment, the standard seals, custom gaskets and other parts produced by Breiner find uses across almost every industry.

Under the hood in your car’s engine and transmission. Across hospitals in equipment like anesthesia masks and heart valves. Inside electronics, commercial lighting, underwater research, elevators, construction, aerospace and more — most people don’t even realize they’re there, but their behind the scenes support makes non-metallic gaskets and seals an integral facet of keeping the world working.

And that variety is all part of the fun.

“We’re doing everything from itty-bitty washers that keep water out of electronics to high-energy physics stuff for the CERN particle accelerator in Switzerland,” Lucas says. “Every day you never know what you’re going to get. We make real simple things, but once you realize where they go and what they do, it’s pretty cool to see the impact we have.”

All in the Family
Bill Lucas Sr., Joe’s grandfather, came from a metalworking background and bought the Breiner family business in 1961. Joe’s father, Bill Jr., went on to run the company and the third generation of the Lucas family has been involved almost as long as he can remember.

“My brothers and I would come into work with our dad and everybody knew us growing up here,” Joe Lucas says. “I’d help my mom do accounting work for the company and when I was old enough, I’d work out in the shop during the summers.”

Joining the company in a full-time capacity after college, Lucas brought a new element to help Breiner into the digital age as a self-described computer nerd.

“We used to do all the inventory, quoting and everything on these little file cards,” he recalls. “Whenever somebody called, you had this delay having to go find everything in big card files like the old drawers at the library. If you wanted to know a tracking number for a box, that was only on some piece of paper back in shipping, so you had to go back there to find that. It was all manual back then.”

The company’s first ever computer was purchased to help with the accounting work Joe grew up doing.

“That led to my dad trying a real basic networking system in 1990, but I remember you had to hold the thing just right to make the wires work, so that was a lot of fun,” he jokes. “When I started full-time in 1996, that was when I started programming.”

Lucas got to work designing a custom software for use throughout Breiner. Part inventory database, part project tracking and department-to-department communication system, it was built to eliminate the physical searching and hunting of potentially misplaced information.

“It was always my goal to be able to resolve any issue or answer any question in one phone call,” he says. “It sets us apart. There aren’t a lot of companies our size that are computerized like this, have information at their fingertips and do it the way we want to do it. It’s very custom to us and our needs.” 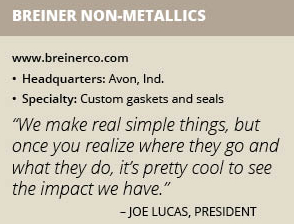 Continuous Improvement
Since purchasing the company from his father in 2014, Lucas has continued making upgrades around the shop. A CNC Flashcutter machine — affectionately referred to as “a computer-controlled utility knife on steroids” — was added in 2015, complementing Breiner’s die cutting capabilities and allowing for greater customization and precise cuts to tight tolerances at a rapid pace.

“That really made a big change in our business and it’s perfect for who we are,” Lucas says. “It’s great for single pieces, doing small quantities and finishing them fast. We can put in an AutoCAD print and have a part done within minutes.”

In an industry in which it can be hard to stand out — “just about everybody who needs one already has a gasket supplier,” Lucas says — Breiner is able to rapidly respond to inventory crises and willing to take on no-minimum, smaller-run orders.

“We won one client over who wanted 100 pieces, but the supplier they were using said they had to start buying 1,000. We were perfectly happy to do the 100,” Lucas says. “Another company was buying parts from overseas, so there’s a big lead time and for whatever reason they hadn’t gotten their parts. It was a pretty simple washer piece, but we went from having never seen the part to delivering 2,000 in less than two days to get them out of a pinch. Those are opportunities where we have no idea when they’re going to come in, but we’re always ready to respond.”

Breiner aims to be a partner its clients can consistently rely on and don’t need to discuss in supplier quality meetings — leaning into the anonymity of their industry as a whole while delivering ongoing performance vital to and counted on across everyday life.