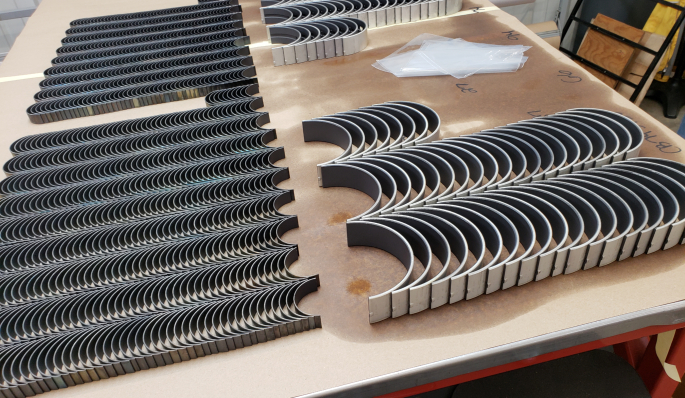 There are many coatings companies, but Calico Coatings sets itself apart by providing outstanding service. “For us, it’s really about doing what we say we’re going to do,” CEO Tracy Trotter says. “We’re always listening to the customer to find out what their specific challenges are.”

A veteran of the racing industry, Trotter started Calico with the goal of creating the most technologically advanced coatings with the ability to withstand the extreme conditions of high speed and engine wear. Using his savings and a loan from his grandmother, he launched the company. Twenty-one years later, Calico is a leader in the coatings industry and serves the automotive/motorsports, U.S. military, aerospace, firearms and diesel engines sectors, among others.

Keeping Up
Although Calico Coatings is the youngest coating company in the market, “We’re one of the fastest growing,” Trotter says, noting that the company is currently at work on a $3 million expansion to its headquarters in Denver, N.C.

“This expansion will grow the facility’s size to nearly 30,000 square feet and allow us to keep up with customer demand,“ Trotter says. “Right now, we don’t have room for all the work that’s going in and out.” 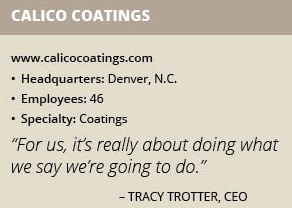 The 8,500-square-foot addition will house production for thin film coatings including Diamond-Like Carbon (DLC) and Chromium Nitride (CrN) processes. It will also free up the existing space for expansion of thick film coatings as well as the shipping and receiving area. Two new thin films vacuum chambers will be added each year for the next five year and they will be three to five times bigger than the ones Calico has today, allowing them to coat more parts at once and boost turnaround time. “We have a tremendous amount of opportunity ahead of us,” Trotter says.

Ensuring Quality
Manufacturing quality is a major focus for Calico Coatings, which the company ensures through consistent employee training. “It usually takes a year for a new employee to learn the full job correctly,” Trotter says.

One reason for this is the many different parts the company works with – all with their own unique specifications. “It’s difficult, because we’re not doing the same thing over and over again,” Trotter says. “It’s a constant learning process.”

Although thin films application is an automated process, all thick films applications are still done by hand. Calico is currently looking at installing robots in its facility which will make its employees’ jobs less physical and more efficient. “Instead of manual work, they will be operating machines,” says Trotter.

All In
Trotter is proud of Calico Coatings and its staff which includes many longtime employees. “Over the last 21 years, we’ve had people leave, but they came back because they liked working here more than the opportunity they were presented with,” he says. “That says a lot.”

He attributes Calico’s high employee satisfaction to his management staff. “We have a good team running the company,” says Trotter. “I can leave for a month at a time and they’ll never skip a beat.”

Although the company saw 40 percent of its customers go out of business during the Great Recession, Calico is now experiencing tremendous amount of growth. “Business is strong right now and our customers are demanding more of us,” he says, but notes that the company is not ignoring the possibility of a future downturn.

“When you’re a small company like this, you’re always looking ahead and preparing for the future. You have to go all in,” he asserts. “If you don’t, you’re going to get left behind.”

Trotter also is confident in the company’s future, thanks to its current expansion, which may also see a growth in staff. “In the next 10 years, we could quadruple the size of the company if we can find the right people,” he says.

Sidebar — Pushing the Limits
Calico Coatings serves its clients with a product lineup that includes Diamond-Like Carbon, PVD, PECVD, Telfon® and thermal coatings, along with non-stick dry film lubricants and phosphate. “Everyone is trying to push the limits and increase performance,” Trotter says. “Our coatings help them do just that.”

Calico’s products allow for these limits to be pushed on components such as valves, wrist pins and pistons. “Not only do they increase performance, they will withstand extreme conditions for a significantly longer period of time,” says Trotter.

Calico has gained a reputation as the leader in the coatings industry by working with race teams and engine builders to solve issues relating to friction, wear, heat and corrosion. “In terms of racing, where a valve would most likely have to be replaced after a 500-mile race, that same valve coated with Calico thin film would easily last 1,500 miles,” says Trotter.