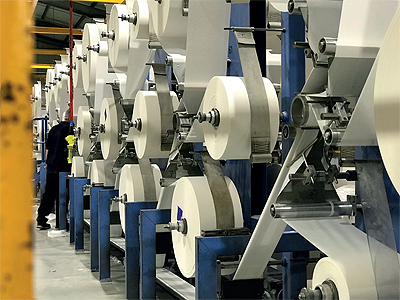 A major manufacturer of facial tissues, toilet paper and kitchen towel, Consuma Paper Products is an industry innovator on a continuous quest for improvement

As part of the company’s long-term plans, Consuma Paper Products has set itself a mission to ‘challenge the status quo’. It is something that Managing Director Oday Abbosh has been doing successfully since 2012, when he devised a scheme to create the world’s first round paper towel. Bringing the concept to life involved moving to Italy and inventing new equipment, but in 2013, Ora hit the market. Since then, the product has gone on to win multiple awards and is now available from some of the world’s biggest retailers, including Amazon and Tesco.

With the success of Ora in mind, Oday hopes to inspire a culture of creativity and a desire for continuous improvement in those working at Consuma. “It’s all about engendering a way of working where people are not afraid to put their hand up,” he says. “It doesn’t matter who you are, it doesn’t matter how long you’ve been working for the business, I want an environment where staff can say, actually, I think we could do this slightly differently. We don’t want people to just be happy with things because they’ve always been done that way, but to actually have the confidence to challenge it and to put suggestions forward.”

Consuma began trading in 2018 after Oday acquired Staples Disposables and moved the Ora equipment into the existing Staples facility. Today, with just under 20 lines in the factory, Consuma possesses a highly advanced, versatile set of machinery with the ability to design and produce a broad range of paper products. Still, the company is always looking for ways to develop.

“We are making multi-million-pound investments across the operation to make sure that we can benefit from the latest equipment available,” Oday reveals. “It enables us to drive up capacity and therefore increase the volume of business we are able to offer. The more efficient we are as an operation, the better it is for our customers.”

To help drive the business forward, Consuma is committed to a programme of investment in people. Over the last two years, the company has strengthened its team with around 20 new members of staff. These new hires include a number of engineers, an Operations Director, a Sales Director, and a Continuous Improvement Manager – a newly created role for the business.

“We’ve put a lot of effort into recruitment and clearly, the best thing that anyone in a leadership role can do is to hire the best talent. If you get that, everything else takes care of itself,” Oday states. “A high-level objective for us is to become an employer of choice in our region. We’ve had a major overhaul of our HR policies and employee rewards system. If someone is looking for a career in manufacturing, account management, sales, or finance, we want them to think of Consuma Paper Products as a company where they want to go and work.”

The influx of new talent is a positive sign for Consuma, after what has, at times, been a challenging couple of years for the industry. Brexit uncertainty and a rise in the cost of pulp created what Oday describes as ‘a major headache’ for the company, but despite the difficulties, Consuma has continued to make great strides both financially and ethically.

“We have been able to grow the business at the top line and that’s very satisfying,” Oday asserts. “We are constantly winning new customers and we’ve continued to service and retain our fantastic existing group of clients. At the same time, we have stayed true to our commitment to sustainability by removing plastic from our packaging, preventing ten tonnes of it from entering the retail chain – the equivalent of 24 million plastic drinking straws.”

With the beginning of 2020 dominated by the outbreak of Covid-19, Oday has been pleased by how the industry has reacted to the pandemic. “Everyone is being flexible and helping each other out. We are collaborating with companies who perhaps, historically, would have been seen as competitors. On a personal level, it is something that I’m very proud to be a part of and our customers have appreciated it immensely.”

Though the uncertainty of the moment makes it a difficult time for businesses to predict the future, Oday is confident that, within the next few years, Consuma will experience substantial growth. “We bought the business with the very clear intention to invest in it and to build it over time,” he declares. “One of the things that has made this business successful in the past is its ability to respond to customer demands and requirements; it is fundamental that we maintain and build on that. Going forward, I think we can outmanoeuvre some of the very large players in terms of how responsive and how agile we are. In time, I think our customers will start to see more from us on the innovation front than they will ever get from the much larger outfits.”