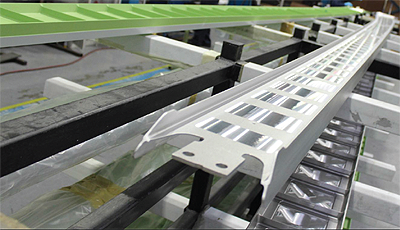 A shared vision of excellence

When Manufacturing Today Europe previously documented the activities of Gardner Aerospace (Gardner) approximately two years ago, we discussed at length how this Tier 1 supplier of aerospace detailed parts and assemblies had enacted a major turnaround project in order to deliver growth, and prepare for the next phase of its expansion. Fast forward to the Spring of 2019 and we find a business that remains in rude health, with sales now totalling around $300 million per annum, 2250 people employed worldwide, and the recipient of investment from its Chinese parent company, aerospace parts manufacturer Ligeance Aerospace Technology (LAT).

Gardner was officially acquired by LAT – at the time known as Shaanxi Ligeance Mineral Resources Co Ltd (SLMR) – in June 2017, and under its ownership the business has begun to capitalise upon the opportunity to accelerate its growth and spread its wings geographically. “Being a part of LAT has helped to establish Gardner locally in the Chinese market,” begins Chief Executive Officer, Dominic Cartwright. “The relationships that LAT have established over many years in the country, coupled with our own aerospace experience, enables us to provide a local service to our customers, while retaining a truly international capability.”

In 2018, the company took a further important step in its Chinese expansion plans by completing the construction of a 45,000 m² facility in Chengdu. “The first work packages, namely Airbus wing detailed parts, have now been identified and we are currently bringing know-how into the facility by building capability and using current customer approvals,” Dominic continues. “Meanwhile, Gardner is installing an in-house function to train local people to follow the ‘One Gardner’ ethos that we hold so dear.”

The One Gardner operating model, of which Dominic speaks, is seen by the company to be a key reason why it has become so well trusted to deliver its parts and is central to its consistent product quality, operational delivery and overall performance across all locations. “One Gardner facilitates consistent, stable operating performance, and ensures that quality, well-invested management systems are in place to provide a high degree of central group management visibility and control over operations,” Dominic explains. “It also calls for each of our sites to have a specific role in producing the type of detailed parts and added value services that our customers require.”

Looking over some of the company’s other highlights from 2018, it would certainly be remiss not to cover its acquisition of precision machined parts manufacturer, Northern Aerospace Ltd (NAL). This development, announced in July 2018, brought a substantial machining capability into Gardner’s product portfolio, allowing a much broader product and service offering, to further aggregate commodities, and increase its ability to make parts of various complexity and size in best cost locations. “The acquisition of NAL enhances Gardner’s capabilities by adding Long-Bed machining, as well as new OEM clients such as Gulfstream, Embraer and Pilatus, and has also helped to raise us to a higher level within the Airbus hierarchy,” Dominic adds. Speaking of Airbus, another highlight for Gardner in 2018 was the company’s elevation to one of eight top performing Airbus Detailed Parts Suppliers. Airbus has consolidated its Detailed Parts Supply Chain from 130 to 80 strategic suppliers, and the new D2P award for the top eight was announced in November 2018, and since then Gardner has been categorised as a D2P Class B Global Partner.

Turning to Gardner’s position in the market in 2019, Dominic is enthused by the potential opportunities ahead. “The Gardner of today, I would say, now has a real value proposition and much greater credibility with engine manufacturers than ever before. As such, we are excited to be working with a number of engine and aircraft equipment companies, and we plan to address the opportunities that arise through organic means and through investment in our manufacturing process. At the same time, we are reviewing potential strategic acquisitions that will enhance our standing and footprint.”

Dominic continues: “As we grow in size, our customers understandably expect more of us. Our manufacturing and engineering expertise positions us well to offer friendly support and advice to all of our customers in order to further reduce the overall manufacturing and support costs of the products that we supply. Now, we find ourselves in a position where we are particularly excited to be involved in future technology projects that include alternative manufacturing processes and materials.”

With the immediate future looking very bright indeed, the bigger picture for Dominic and the rest of the Gardner team involves a number of important strategic objectives that the company hopes to achieve by 2023. “By this time,” he goes on to reveal, “we have every intention of being established as a top 75 aerospace company in the world – acting as a strategic supplier to a minimum of three aircraft manufacturers, two engine customers and two equipment sector customers – and with revenues of around $1 billion. To achieve this, we will require more talent, and thus we want to increase our global workforce to over 3300, while also broadening our technical capabilities, balancing market dependencies, and retaining the unrivalled level of service excellence that Gardner has become so well known for.”