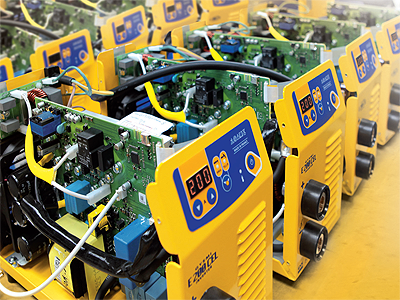 The understanding that it should rely solely on its own capabilities as it climbs to the highest echelons of the welding industry is a definitive trait of GYS that speaks volumes about the value system established and followed by the company since its renaissance began in 1997. Well-versed in the engineering and manufacture of welding, automotive body repair, and battery service equipment, the French family-owned group has firmly taken the path of constant investment in R&D and continuous improvement of its manufacturing processes over the last 20 years. By virtue of its prudent financial decisions, it has achieved a remarkable organic growth on a year-on-year basis, proudly claiming the position today of Europe’s largest manufacturer of inverter welding machines.

“It can be a characteristic of companies that grow quickly that the perception can lag behind the reality. It is true for GYS that we have to work hard to ensure we communicate properly to inform customers of the present capability of GYS. It is normal for people to be genuinely surprised at the scale of our operations nowadays,” remarks GYS UK’s Managing Director, Neil Pulsford.

Neil then takes us on a journey through GYS’ history, which he intertwines with an account of the revolutionary technological developments in the welding industry in the last two decades. “Our timeline divides into two periods. The first one started with the creation of the company in 1964 when Guy Yves Stephany founded the business in response to the change of voltage from 115 V to 230 V initiated by the state-owned Electricity of France company. His idea was to manufacture transformers on behalf of Electricity of France for households in the western part of the country.”

The 1970s saw GYS expand its product range with car battery chargers and welding machines and success remained the company’s trusted companion throughout the years that followed. A period of decline in the latter part of the 1990s, however, brought GYS on the verge of bankruptcy. This was the time when the manufacturer’s current owners D– Nicolas and Bruno Bouygues (father and son) – acquired the business and began the revolution for GYS that we can now see.

Neil continues: “Being a family-owned company has enabled us to deliver a true long-term strategy, without influence from external investors. The owners’ unflinching belief in the need of investing heavily in R&D has been a cornerstone for the company fuelling double digit annual growth for some 20 years now. GYS is by definition a learning organisation, constantly expanding its knowledge, mastering the ever-changing technology that we now see in the latest most complex welding equipment that we manufacture.”

Winding back the clock to the close of the 20th century, at the heart of a welding machine was a transformer power supply, a very basic technology. Since then, an astonishing technology shift has taken place, turning the modern welding machine into an extremely complex electronic device.

“The term we use in the industry, is inverter welding machine,” Neil explains. “The move towards an electronic power supply coincided with the time of Nicolas and Bruno purchasing the business and they were really keen to embark on a journey of continuous investment in electronics. We continue to maintain a large R&D team, whose work over time has helped us to establish a product range of over 70 different machines, a far cry from where the company was in 1997.

“In recent years, in particular, we have started to see the emergence of software-upgradeable equipment, whose growing popularity is another clear marker of the evolution of welding technology,” he discusses the very latest hot trends in the industry. “To give you an example, at one end of the scale, we have the simple hobbyist, who may use a small arc welder or a small MIG welder to do a simple repair, and at the other end, there is the incredibly complex, high-power Neopulse 400 MIG machine that features multiple electronic cards and tens of thousands of lines of software. There is very little in common between the two types and the rate at which technology is progressing means that even the most recently-launched machines can have a lifecycle of just three or four years.”

Staying on top of all the latest developments in welding and effectively disseminating and receiving the information about the capabilities of new models, is arguably one of the principal challenges of the day faced by producers and users alike. A by-product of the industry’s rapid modernisation, the new knowledge that is being generated calls upon manufacturers to put in extra effort in transferring this intelligence down the supply chain. “Another feature of markets where technology is moving quickly is that it can be very difficult for customers, both end users and local distribution, to keep abreast of the latest equipment and its capabilities. It therefore follows that the manufacturer has a clear responsibility to inform. This requires both the right approach and also a commitment to investment in local markets. “This is why our strategy is to place serious investment in growing our service capabilities by offering full support to our key local markets (mainly the UK, Germany, France, and Italy) where we have strong subsidiaries that employ highly skilled industry experts to provide the highest level of service in the market to support our customers and take care of the distribution of our products.”

Whereas GYS’ welding equipment range represents the majority of the group’s turnover, the remaining share is divided between the organisation’s car body welding range (25 per cent) and battery charger and maintenance products (20 per cent). Unsurprisingly, there is a big overlap between the requirements that the company needs to meet when manufacturing the three product families. For Neil, branching out into other battery environments for the otherwise automotive-oriented division will provide a number of growth opportunities, due to the growth in application of battery technology (often lithium) for off grid storage.

“There is no doubt that we have the knowledge, so we are now working to apply our expertise to new applications,” he reasons. “What used to be the humble battery charger is now a powerful electronic device that is much sought-after by the largest global car manufacturers. We have products that can be connected to the Internet and that are upgradeable and customisable, so they can play a vital role in a range of different markets.”

For GYS, the last 18 months have marked an important milestone in its welding capabilities as the company has finally arrived as a full range welding supplier. The industrial welding catalogue is largely complete and able to serve every segment of the market. This has further fuelled the growth of the organisation with 40 per cent growth being seen in its UK activities since the start of 2019, and other impressive progress in GYS’s other major markets maintaining double-digit growth across the entire group.

Neil delineates GYS’ strategy for the years to come: “Now that we have completed our range of industrial welding machines, the challenge is to raise brand awareness and let the market know about our proposition. To this end, we will be working to improve our communication with the welding industry. We are growing at an excellent rate, but at the same time, there are still quite a few markets where our share is rather modest. The potential to increase it is there and we are expecting our proven successful model to bring us further growth in these areas, too.”