When InnoMark Communications serves its clients, it takes the time to discover their needs and resolve their challenges as quickly as possible. “If we’re not responsive to our clients, someone else will be,” Executive Vice President of Sales and Marketing Steve Zick declares.

The company also takes a long-term approach every time it serves its customers, which has helped it nurture a strong rate of repeat business. “We know it’s important to meet our clients’ needs not just once, but continually,” he says.

Based in Fairfield, Ohio, the visual marketing company designs and manufactures displays, retail signage and packaging products that connect brands to customers. Three founders started the firm in 1991, with the vision of creating the first fully integrated company of its type in the nation. At the time, the industry was much different than it is now, Zick says.

“If a company wanted to put a display in a retail store, it was a long process that involved a lot of vendors,” he recalls, explaining that companies had to go to one vendor for the pre-press aspect, another for printing, and a third to assemble the display and deliver it to stores.

The three men sought to change this inefficient model by providing all of these services under one roof. After purchasing Printing Service Co., a large-format printing company in Dayton, Ohio, they created the foundation for what became InnoMark.

Over the years, the company added all of the components to provide a fully functional, innovative solution for interior retail signs and displays. “InnoMark was an innovator in that sense,” he says. “Many companies have moved into copying the same model.”

InnoMark also has transitioned into the permanent display, conceptual design and consumer experience technology arenas. “We’ve moved into the areas of customer support that involve technology and data,” he says.

Bringing Benefits
Today, InnoMark serves a broad client base that includes national retailers as well as brands in the sporting goods, pet care and supply, grocery, fashion and beverage sectors. “There’s a wide variety in there,” Zick says. 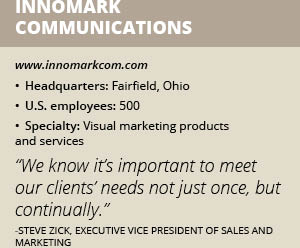 The company employs a diverse and talented group “that allows us to not just produce something that nobody else comes up with but offer our clients solutions,” he says. InnoMark will begin working with its customers during the conceptual stage so it can brainstorm ideas.

The firm also is situated geographically in a way that benefits its clients. “When you’re dealing with national distribution, it’s important to be in a part of the country where you can get easily to everybody,” he says. “Our location is in a really good spot, central to U.S. operations.”

Making Snowflakes
When InnoMark makes a product for its client, it almost never makes that exact same item again. “A lot of what we make are snowflakes,” Zick says. “While the technical aspects of what we produce are consistent, the message is different.

“The color schemes also are different as it gets into promotional changes,” he says, noting that the firm customizes nearly every product. That ability has allowed InnoMark to form relationships with clients by providing something “that they can’t get anywhere else.”

It also has made the company’s focus on manufacturing quality very important, which has driven it to be ISO 9001: 2013 certified and earn the status of a G7 master printer. “We have four G7 experts on staff,” Zick adds.

The company also uses lean manufacturing practices and focuses on opportunities for continuous improvement. “Those are handled with urgency and strong expectation for corrective action,” he says.

“Whenever you’re dealing with people, you’re going to have mistakes,” Zick admits. “That’s fine, but we don’t like to make the same mistake twice.”

Creative Minds
A longtime veteran of InnoMark, Zick is proud of the company and its skilled team. “It’s easy to buy equipment with some money, but the reality is if the people you have don’t care or are inept, you’re going to fail with that equipment,” he says.

“From the management to the line staff, we look for people that care,” Zick continues. “We’ve got a wonderful crew of people that are talented in ways that are unique in the industry.”

For example, he says, some have an eye for color that is out of the ordinary. “[Our] people can come up with a production path that is totally unique,” he says. “We have projects for this year’s Christmas that have never been done before.”

Zick predicts changes ahead in the retail industry. “I see packaging playing a role [where it gets] more unique and more functional,” he says, noting that displays also will engage more with the customer at the store level. “[That will give] the ability for the brand or retailer to engage with the customer in a more meaningful way.”