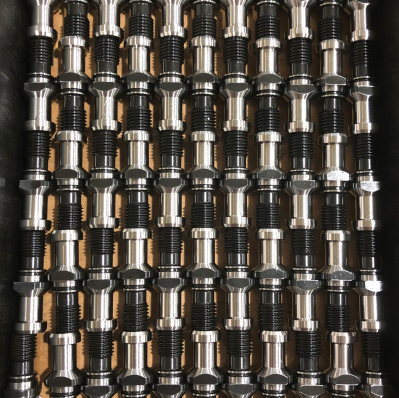 It is rare for a company to enjoy complete client satisfaction when it introduces an innovation, but JM Performance Products (JMPP) Inc. has experienced that with its High Torque Retention Knobs. Since their introduction, “We haven’t had any products returned to us,” owner John Stoneback reports.

Based in Fairpoint Harbor, Ohio, JMPP stands as a leader in its industry for the manufacturing, development and quality control of precision turned parts. Stoneback explains that he co-founded the company in 1966, but its roots go back to the work that his grandfather performed out of his home.

At the time, “He had a small shop in his basement,” Stoneback recalls, adding that he helped his grandfather win work from General Electric in Cleveland. “During that time, he got so busy that he wanted me to work Saturdays and Sundays with him.”

When the two formed the company, they continued working out of the basement before moving to a separate facility, which it eventually outgrew. Today, JMPP operates out of its current location in Fairpoint Harbor, which spans 18,000 square feet and features up-to-date equipment. “Eighty percent of our machines are less than four years old,” Stoneback says.

While the majority of its sales come through distribution channels, it works with many aerospace companies. “We also have a lot of tier one and tier two automotive providers we work with,” he adds. “If there is CNC milling done, our product is used.”

Fantastic Work
Nine years ago, Stoneback developed the concept for JMPP’s High Torque Retention Knobs. At the time, he was asked by The Boeing Co. about making a toolholder with a retention knob in it that would not expand the toolholder.

Although Stoneback initially declined the offer, inspiration hit him days later. “At three o’clock in the morning, I grabbed my wife’s shopping list and sketched out a fixture,” he recalls, noting that he later did testing with other brands of toolholders.

During the testing, Stoneback found that there was a design flaw in the retention knobs, causing the bulge to form at the small end of the toolholder tapers. When this happens, it causes the large end to be loose and not properly fit in a spindle.

This can result in excessive harmonics, more damage to the toolholder and spindle, and reduce tool life, costing users money during production. As the company continued developing the product, “We started to see if we could make a retention knob that would not make it bulge,” Stoneback says. 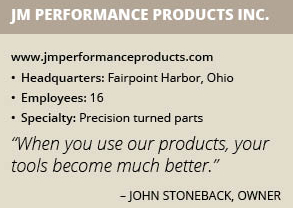 Finally, the company succeeded after trying 25 different varieties. “We didn’t find anything that worked until we tried one at the maximum taper length that the toolholders were made to,” he recalls. “It worked fantastically.”

Satisfied Customers
Today, JMPP holds a patent on its High Torque Retention Knobs. “It’s 100 percent of our business,” Stoneback reports, adding that the company has been able to help clients such as Lockheed Martin Corp. and Boeing.

“Our customers have started telling us things like they don’t have any more troubles machining titanium,” he says. “Some of the companies that use our parts can use them in lights out manufacturing in aircraft parts.”

Once the client has a toolholder that fits properly, “It is a brand-new machine,” he asserts, adding that clients enjoy such advantages as less breakage and cost savings. “Most of the companies that use our product will get a 20 percent increase in money at the end of the year.”

Boeing has particularly enjoyed savings after paying up to $3,000 for its toolholders in its carbide end mills. “When they put our knob in, that tool lasts two to three times longer than a regular knob,” Stoneback says.

This is critical for the aircraft company, which runs its machines 24-seven. “You’re talking about hundreds of thousands of dollars saved,” he says. “When it is done, Boeing’s average part cost on the machine is over $1 million.”

Despite the advantages customers have enjoyed with JMPP’s products, the use of damaged toolholders is still prevalent. “We’ve determined 95 percent of the shops in the United States are running with loose tools,” Stoneback says.

This, he notes, is a major cause of breakage. “All of sudden they get so much pressure that the actual carbide will snap,” he says.

One of the major reasons for this, Stoneback notes, is that many shop veterans who have experience with the problem have since retired. “They’re now working with people that run off of charts and computers,” he says. “But there’s no chart or computer that can tell you the retention knob was engineered incorrectly in the beginning.”

JMPP has sought to spread awareness through training as well as promotion of the retention knob product. The company has hired a public relations associate who often approaches clients about publishing articles that tell about their successes with the retention knob.

“There’s been close to 100 magazines that have taken an article [featuring] our customers,” Stoneback says, noting that this has been an effective approach for the company. “They’re actually saying the finishes are better, the tool life is longer and it’s made their lives a lot easier.”

Going forward, he says, JMPP will increase its advertising initiatives to help mills continue to enjoy significant savings. “I can make every one run better and faster,” he says. “No one on this Earth does that better than we do.”