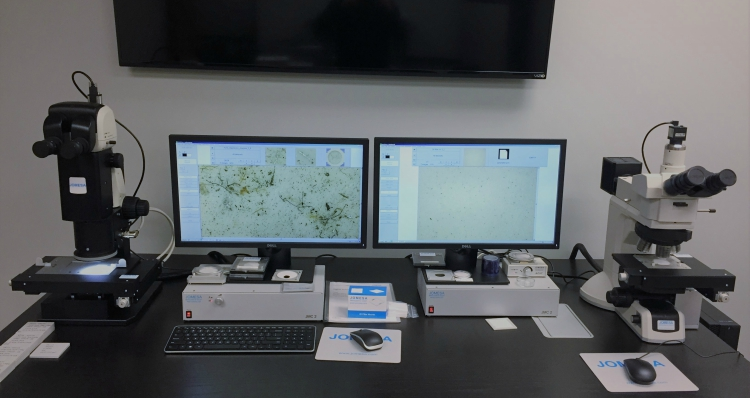 Some companies put distance between themselves and their customers, but JOMESA North America Inc. eliminates those barriers, Product Management Director Peter Feamster says. Instead of maintaining layers of bureaucracy, “You can talk to our owner any time,” he says.

Based in Troy, Mich., the company is the North American operation of JOMESA, a Munich, Germany-based firm that offers microscopic filter analysis systems. He explains that JOMESA started operations in the mid-1980s and sold early versions of its product.

As the technology became more sophisticated, German automotive manufacturers asked JOMESA to create a system that could take pictures of filter membranes and measure contamination. These would be used after the manufacturing process for transmissions, fuel lines, pumps and valves.

“The automotive manufacturers wanted to improve their cleanliness analysis,” Feamster says, explaining that any particles or debris left after the manufacturing process can affect engine performance. The manufacturers wash the parts through filter membranes and use JOMESA’s technology to measure, count and categorize individual contaminant particles.

This is now a common practice in the automotive industry, but JOMESA “was one of the first tasked with applying image analysis software to this specific application,”  he says. “JOMESA has been the leader from the beginning.”

Today, JOMESA provides the HFD4 system to the automotive industry, as well as the medical, pharmaceutical and aerospace sectors. “The main focus of our business is providing analysis systems as well as the consumables that are used in these processes,” Feamster explains.

Feamster joined JOMESA in January 2017, after working as a project coordinator for Ecoclean, a company that designs and builds industrial parts washing machines.

“Parts being cleaned prior to assembly in transmissions or engines are often held to a cleanliness specification,” he says. “I was introduced to JOMESA as a customer before I was an employee.”

Feamster credits JOMESA’s success to its focus on customer service. When the company’s automotive clients call about their JOMESA equipment, “They’re always going to get support from someone they’re familiar with,” he continues.

“To get support from someone who has trained you before gives you more comfort,” he says. 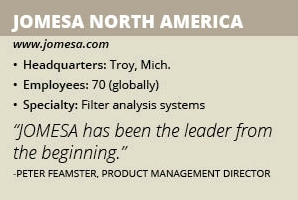 Feamster also praises its commitment to staying state-of-the-art. “We have continuously improved on our software,” he states. “We strive to have the latest innovations for cleanliness analysis.”

But when JOMESA introduces a new innovation, it makes sure it fits into its clients’ older systems. “All new upgrades are retrofitable to existing HFD systems; this gives our customer the ability to scale their system to fit their needs,” he says.

The manufacturing sector is currently very strong for JOMESA, particularly in North America. As many companies implement cleanliness applications, “Our goal is to get into discussions with these companies as they’re establishing these specs,” Feamster says.

“We want to work with them as early in the process as possible,” he continues. “Our product is the market leader for a reason, but the key is getting in the door.”

The company also is enjoying a business boost in China. “The Chinese automotive manufacturers take a lot of their leads from the German makers,” Feamster explains. “They are increasingly demanding this equipment.”

He adds that JOMESA has a new product for 2018, which integrates an SEM/EDX system with its current PicEd software. “This will give our customers the ability to measure samples optically (HFD) as well as analyzing the chemistry of the particles (SEM/EDX) in regards to cleanliness specifications and quality control,” Feamster says.

JOMESA maintains strict quality standards. When materials arrive from the company’s suppliers, “Everything is tested as it comes in the door,” Feamster says. The company also rigorously tests systems before they leave its facilities.

All of its consumables manufacturing is performed in a  cleanroom. “We laser cut all of our filter membranes in order to maintain the highest quality,” he continues, adding that the company tests its filter membranes as well.

Some competitors do not follow such standards. “At JOMESA, we strive for the highest quality standards in our products,” he asserts, adding that the company tries to bring as much production in-house as possible. “We try to rely on third-party suppliers as little as possible.”

After 12 months, Feamster is proud of JOMESA and the quality of its products. “[That] is really what drew me to the company and what impressed me as a customer of the company and as an operator of the system,” he says. “It’s so user friendly.”

Users, he explains, can use tools in the system to produce customized reports, tailored to their customers’ requirements.

“It’s clear that the software was designed with the user experience in mind. It is very user-friendly,” Feamster says, noting that the company also makes changes based on customer feedback. “We try to make things easier based on that feedback.”

Feamster sees continued growth for JOMESA: “I see a big opening for consumables [filter membranes, filter mounts, etc.] in the North American market. There’s a handful of suppliers, but the quality is not always there.”

The cleanliness portion of manufacturing also is going to become more critical to these companies. “They’re going to clean up their entire process, so there’s going to be a lot of demand for cleanliness consulting and for environmental testing,” he predicts.