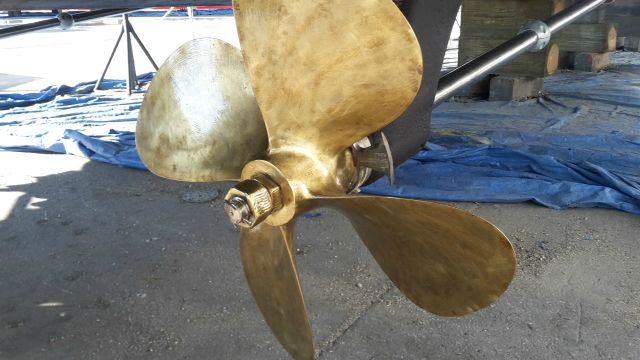 It’s a problem that’s been going on since the days of Odysseus. When a ship is still in the water, it’s bound to attract some unwanted riders. But now coating manufacturer LiquiGuard has a patent-pending innovation that protects vessels from barnacles, zebra mussels and other bio-fouling organisms, with a durability that exceeds other current solutions.

All sea and fresh water vessel share the problem of fouling: the accumulation of material such as marine organisms, algae and microorganisms on submerged surfaces, which carries significant economic and environmental costs. Many species are invasive pests and transport themselves to new environments by hitching these free rides. According to a published report, the U.S. Navy spends $1 billion-plus on antifouling efforts. As the fouling builds up, it can significantly impact the operation of the vessel. The added material creates more drag in the water, slowing boats and requiring them to expend more fuel to maintain speed. Maintenance also becomes an issue because the organisms can attach to the propulsion system such as propeller, shafts, rudder, trim tabs, etc. Fouling can even damage the hull and impact the vessel’s structural integrity.

Boat operators have a limited ways to prevent or remove the growth, and all existing solutions have significant drawbacks or challenges. One of the most common treatments is anti-fouling paints, which contain a copper-based nitrate that is applied to the hull in a a thick coat. The paint is generally black in color to hide the discoloration of the anti-fouling chemical. There are several problems with these types of materials, besides the fact that due to their ablative nature (layers of the coating shed on an ongoing basis) they need to be replaced on a regular basis. The anti-fouling chemicals poison species indiscriminately and can accumulate in waterways, causing long-term damage. Use of these products are slowly being banned and many ports will not allow vessels with anti-fouling coatings to dock.

Other products are designed to specifically prevent fouling from building up on the running gear, which includes the propeller, drive shaft, etc. Crews must clean the metal before applying an etching compound followed by a topical coating that prevents organisms from getting a grip on the running gear. When the vessel is in operation, the force of the movement through the water dislodges the fouling and flings it from the vessel.

However, by virtue of being a topical coating, these products are displaced easily if the ship runs into a sand bar or a rope brushes against the propeller or other components. Reapplying the coating requires the vessel to be dry-docked and the entire process of application repeated. The expected effective lifespan for most of these foul release coatings is on average six months, forcing boat owners to reapply the product every season – a laborious and expensive proposition.

“The industry is fervently looking for a better solution to take care of this problem,” LiquiGuard CEO Abbas Sadriwalla says.

Creating a Solution
LiquiGuard’s expertise in developing innovative specialty protective coatings made it the right company to come up with that solution. The key was an existing proprietary hybrid polysiloxane resin LiquiGuard had used in other applications. The coating had a resistive nature that made it an appealing candidate, including impermeability, adhesion and outstanding 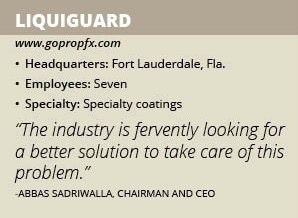 abrasion resistance. “Two years ago, we started researching what we can do with this great coating and how to apply it to solve this marine problem,” Sadriwalla says.

This research led to the now patent pending Nano Fluid Surface Technology (NFST) with the hybrid polysiloxane providing a durable and dependable foundation polymer. NFST, a unique proprietary technology, transforms the surface of a solid material into a thin, immobilized lubricant layer by delivering a repellant fluid from encapsulated reservoirs discreetly diffused throughout the tough polymer coating. The release lubricant is configured to migrate to the coatings surface, suffusing it and creates a smooth, slippery interface. Whenever this interface is disturbed or displaced, a replenishing fresh layer manifests itself from the invisible reservoirs entrapped in the coating.

Other attempts at creating a liquid surface interface have been successful by elite organizations such as MIT under the brand name LiquidGlide and by Harvard, which branded its innovation SLIPS (Slippery Liquid-infused Surface). The Indian Institute of Technology, Powai through independent research, had also developed a similar solution. These solutions differ from LiquiGuard’s NFST by virtue of the fact that the liquid interface is created by first laying down a nano coating layer with a very coarse, or rough, topography ranging from a roughness scale of 2 nanometers to 30 nanometers. The surface was then suffused with a viscous fluid selected from a group of polydimethylsiloxanes. The fluid was trapped and stabilized in the rough terrain of the nano layer previously applied. Unlike Liquiguard’s NFST solution, the slippery layer in the above solutions is subject to easy disruption when encountering physical and rough forces, which is common in marine environments.

Fuji Films Smart Surface technology was another innovation designed to solve the bio-fouling problem. Due to the cost and complexity of the coating application the product was discontinued. There have been numerous other attempts that fell short due to the demanding nature of the solution.

Ready for Prime Time
Liquiguard is proud and excited to bring to market a truly novel and effective coating that will help solve a severe problem for the marine industry and have implications for other commercial and industrial sectors such as wind energy, fish farming, oil and gas pipelines, self-cleaning coatings for large structures such as towers and bridges, ice-phobic coatings and anti-graffiti coatings.

Unlike other products, PropFX consists of a single two-component material that is crystal clear and applied to the running gear and the submerged area of the hull, if so desired, when the vessel is dry docked. It takes a minimum of eight hours for the coating to cure, although Sadriwalla says most vessels should be given 24 hours to cure before they are returned to the water.

While the mechanism of causing foul release by preventing attachment is common between PropFx and competitive coatings, it has been observed that on vessels that remain stationary for several weeks the fouling is able to firmly anchor. With PropFX having its hybrid coating as the foundation, this type of anchoring on a stationary vessel, even after extended duration, is avoided.

Unlike many other solutions, Prop FX does not contain any biological component, so it won’t react to any of the animal or plant life within the water. “It’s formulated from inorganic material so therefore is non-polluting and does not contain any copper based ingredients, which prevents corrosive interaction with other metals such as aluminum,” Sadriwalla says. Once the coating is dry, it remains inert and provides an electrically non-conductive barrier.

Prop FX is also designed to hold up better over time. Where other solutions are topical and are at risk of rubbing off, Prop FX bonds directly into the surface of the material. If something rubs across the bottom of a ship coated with Prop FX, the oil embedded into the nanostructure of the hull surface seeps out and restores itself.

Because PropFX forms a chemical, in addition to the mechanical bond, with the metallic surfaces of the running gear, the hard film coating is expected to last much longer than the six months standard in conventional foul release products. “Based on calculations and preparations of the material, we feel that two years is a reasonable estimate,” Sadriwalla says.

Its early success with local boatyards already has LiquiGuard thinking about applications beyond the marine industry. “I believe we are the only company with such a solution,” he says. “It’s quite enigmatic and conceptually unique. We are open to working with other industries to share this technology and bring this solution to market.”