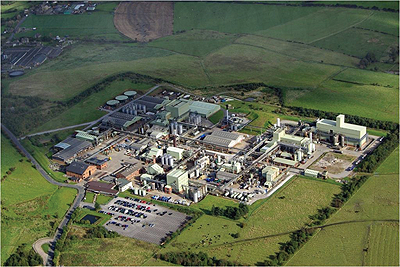 Nufarm employs a tried and tested technology to manufacture phenoxy herbicides that help with the optimisation of cereal and grassland crop yields. Running highly-automated processes, the agrochemical producer is getting ready to increase its output

Holding more than 85 per cent of the global market share, Nufarm is the undisputed leader in the production of phenoxy herbicides. The Australia-headquartered company specialises in manufacturing MCPA, mecoprop, dichloprop, MCPB, 2,4-D, and 2,4-DB from multiple sites across the world. As post-emergent herbicides, the phenoxies are a family of chemicals related to the plant growth hormone indoleacetic acid, which, when sprayed on grass crops, kill broadleaf weeds to increase the yield of the crop.

The city of Bradford is home to Nufarm’s UK operations and has been such since 2008. Two years after the site at Wyke Lane was acquired, the company closed its other plant in the country (in Belvedere, Kent) and relocated all of its activities to the new facility, where it produces most types of the aforementioned herbicides. Site Director Paul Else discusses its functions: “First of all, the site has been in operation since 1877 and was privately owned until we bought it 11 years ago. All of the specialities we needed were already in place when we took control of the plant, so we retained and absorbed them. We have a team of PhD chemists who undertake a lot of product development work, as well as regulatory, chemical engineering, electrical engineering, and control engineering teams.

“Notably, many of these functions now serve not just our UK operations, but also support our colleagues from other parts of the world. For example, our chemistry team is doing a lot of work to help our site in Gaillon (France) integrate its latest major acquisition into the business,” Paul points out.

“Together with the range of herbicides that we make here in the UK, our facilities in Linz (Austria) and Laverton (Australia) produce 2,4-D, which extends our market coverage further,” he continues. “As a whole, we are backward-integrated with the key intermediates, so we bring in base commodity chemicals, convert them to the intermediates we need, in order to manufacture the actives, and then produce these actives themselves. We also hit all levels of the value chain by being able not only to provide the technical active, which is a solid melting at about 140°C, but also convert it into liquid derivatives, which we then supply in bulk or in anything down to a one-litre can.”

The herbicide technology used by Nufarm is not new at all. The unique mode of action of the various products, however, has ensured their longevity and they are still widely applied across the world, be it as standalone solutions, or in partnership with other types of herbicides. “They mimic a naturally occurring plant growth hormone called auxin, thus overstimulating growth and killing unwanted plants, which leads to the yield per planted hectare being significantly higher. We live in a world where we have increasing demand for food and it is clear that we need to address the food deficit issue over the next 30 years. Therefore, it is critical to optimise the yield from all the land available to us and our products are very effective tools to do that,” Paul maintains.

For Nufarm to remain cost-competitive, the company has invested considerably in process automation. “We now operate a distributed control system, which is being monitored by our staff who take and analyse samples at critical control points and, if necessary, make adjustments to it,” Paul explains. “The level of automation and control we have over our processes, is key to our success, as we are able to consistently make products of the highest quality. The forecasts are for continued growth in phenoxy herbicides demand, so we have a programme of investment in place that will help us handle customer requirements.”

Having opened up on how the market might look like in the years to come, Paul adds that the increasing pressure to reduce pesticide application rates is one of the big challenges faced by the agrochemical industry in Western Europe at the moment. “A lot of research on historic actives is being done to increase their efficacy, because fewer new active ingredients are being released into the market, as the process has become long and expensive. We operate in a heavily-regulated area where you have to clearly demonstrate that the materials you work with and produce are ecologically and toxicologically benign. Our regulatory scientists and toxicologists spend a lot of time identifying impurity species, which are then synthesised by our chemistry department, so we can screen them and ensure that they are safe.”

Nufarm has become an industry leader not just because the company makes wise infrastructure development moves, but also because it was shrewd enough to focus on introducing young blood into the business long before the widening of the skills shortage gap in British manufacturing. “Fifteen years ago, we realised that it was going to be difficult for us to hire people with the skills we needed once our then-workforce reached retirement age,” Paul remembers. “Due to offshoring and increased competition from the Far East, in particular, the process industries in the UK suffer and the number of workers being employed in these sectors have decreased dramatically since the turn of the century. Consequently, we decided to set up a process skills apprenticeship scheme that would help us create a pool of skilled people. Upon taking another six apprentices this year, we will have a cohort of about 16 young people at various stages of their training, so it is safe to say that this initiative of ours has been quite successful year-on-year. On top of that, we also upskill our existing staff, offering them paths for continuous improvement and putting the highest-performing individuals through leadership development programmes.”

Looking ahead, continued expansion and revenue growth are natural future goals for Nufarm, with the company also aspiring to launch a number of new products in the forthcoming years. Paul concludes: “We have done a lot of work through our operational excellence programmes to increase the efficiency and capability of our manufacturing footprint. Now, it is about using it to its full potential to release these new products.”