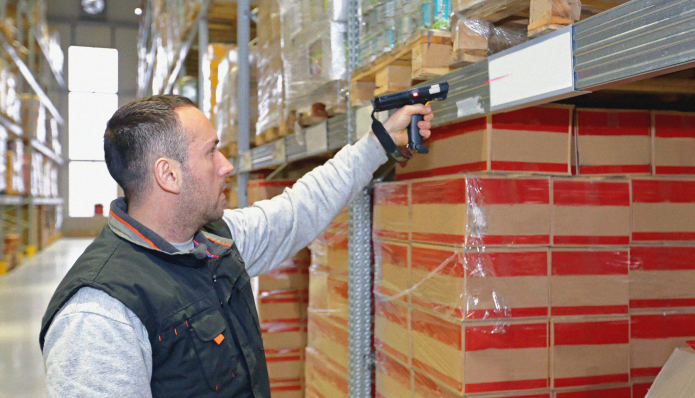 Most manufacturing facilities have a good handle on how much material and labor it takes to make something, Jeff Lem explains, but facilities aren’t as informed when it comes to material movement and flow. As founder and president of Portable Intelligence Inc., Lem has an idea of what manufacturers need to do to gain this knowledge. A big part of it is adding smart warehouses to smart factories.

“We work with several auto parts manufacturers,” Lem explains. “Their data sets can tell them when materials are dropped off, but the data can’t tell them when the material was first picked up and where, so they don’t know how much time it takes to bring materials from point A to point B. When you know the OEM is going to increase output by 50 percent in the next two years, you know you can scale your manufacturing but you don’t know how to scale your material handling other than by adding bodies. The data doesn’t show you how many people to add, so the operation just gets more crowded and congested, and that impacts safety and efficiency.”

Portable Intelligence helps resolve these issues by ensuring the warehouse is as smart as the factory. The company’s warehouse management systems offer real-time inventory tracking, real-time labor tracking and real-time proof of delivery. Lem notes many warehouses today work at 60 percent of their capacity, but Portable Intelligence can improve that. He says a smart warehouse helps in two key ways: it tracks the location of all material handlers in the facility, and it establishes standards for every material pulled per transaction.

Lem explains a standard example is that a machine needs a particular part, in a certain quantity. A handler has to take the part from a particular bin at a certain location in the warehouse with a specified pallet and ID, then bring it to the machine, and the handler has 15 minutes to complete this task. 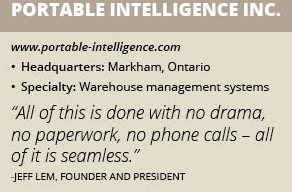 “Smart warehouse takes you back in time to when manufacturers used to pool their labor,” Lem says. “A manufacturer would have two or three guys who would pool materials for the entire facility. The facility was small enough to allocate the work between those guys, all of them were kept busy and the work level was balanced. They all worked as a team and it was a self-governing situation, so not a lot of supervision was needed.”

Now, however, most warehouses are much larger, there are 15-20 material handlers and three to four guys may be assigned to each zone, but the work is unevenly allocated, he says. Additionally, it becomes difficult to manage a workforce when they are spread out over a large space. Portable Intelligence works with clients to eliminate these issues.

“Smart warehouse knows where everyone is in the facility,” Lem explains. “Every area has a primary and secondary responder, and if the primary responder isn’t available, the system looks for the secondary responder, and this is where the magic happens. By virtue of the worker’s location, the system knows if he or she can complete the task within the required time. If need be, smart warehouse will adjust so the transaction will be done before the line runs out of material. All of this is done with no drama, no paperwork, no phone calls – all of it is seamless.”

Increased Productivity
Many companies don’t have material handling benchmarks in place, so Portable Intelligence works with clients to establish them. It starts with general rules of thumb, estimations from management, and then its system will learn and update itself to develop standards specific for the client’s operation. Next, it works with clients to reallocate labor and create effective teams with incentive systems and making a common goal visible.

Lem explains Portable Intelligence talked to as many businesses as it could in developing its technology, specifically those that succeeded with team environments. At Apple stores, for example, the fixer Geniuses have so many appointments each day, and a certain amount of time is allocated for each call. At the beginning of the day, every team member can see on their iPad how many calls the store expects to handle that day. During the day, if one call takes longer than usual and the Genius on that call falls behind, it will be flagged and another person comes to help.

“This is a team where everyone lives by and celebrates the daily number,” Lem says. “If anyone has a problem on the floor, often those responses go straight to Tim Cook because the front-line people are the customer satisfaction points for the entire company.”

He notes that the supply chain labor market is very tight and expects the market to continue to be tight in the future, but the Portable Intelligence technology helps to optimize the workforce, as well as making it easier to attract and retain new people. It can help better engage, collaborate with and utilize companies’ workforces to remain competitive.

“Smart is about working in line with the reality of today’s workforce and what’s happening demographically in these facilities,” Lem says. “Technology and working smarter can give people more job satisfaction, and working in teams often gives greater satisfaction than always working by oneself. The key is consistency, and employees like being able to help each other out. That positive work environment also makes them more productive.”

When Portable Intelligence has these conversations with its customers, Lem says lightbulbs go off because they want to know how to best utilize or get more out of their workers. This is why a smart warehouse makes sense on so many fronts.

“Most manufacturers hate inventory because they’ve been brought up on lean and just in time,” Lem says. “But that can be hard to sustain with tight lead times from customers, customer forecast demands and delivery levels. Planning for the short run isn’t efficient – it’s the long run that keeps costs down. You have to work smarter.”