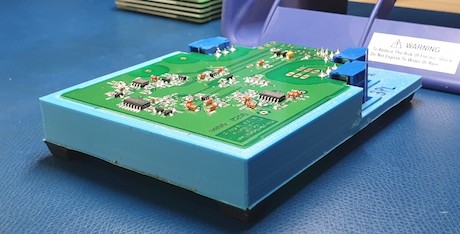 Rechner’s newest product – EGI Logic Controllers – makes integrating sensors into new and existing projects easy. “It was a German product but redesigned it for safety standards, received certification and started making it in our U.S. office,” says Ben Hooper, manufacturing manager. “It goes along with our main product: capacitive sensors.”

A capacitive sensor is a switch with no moving parts. It is used in industrial production and industrial automation applications to detect the position, presence or level of various powders, liquids, solids and sticky materials.

This simplifies installations, saves space, time and increases productivity by automating tasks. The relay can be connected to control an AC pump or motor, or even be used to output a signal into a PLC. An EGI Logic Controller consists of a DC power supply, relay contacts and logic – all in one easy-to-use package.

“It allows you to convert an older-style sensor that runs on AC [alternating current] power and use a DC powered sensor instead,” he explains. “It has a unique design. Normally you’d have to buy three separate components – power supply, relay and logic controller – to do what this does. We integrated all three into one product. Right now, we are the only sensor company that provides this kind of solution.”

The product is proving to be popular as many companies are no longer making AC sensors in favor of DC sensors, which are electrically more stable through better signal filtering.

“The problem with older-style AC and dry-contact mechanical switches is the moving parts,” Hooper says. “That’s especially a problem where there’s powder or sticky materials. It will get dirty and the sensor won’t move properly. Our DC sensors can see past the build up of dirt and still switch on/off properly.”

Three Models
Rechner’s logic controllers are available in three different types: on/off relay, time delay relay and pump in/pump out relay. “If you are only concerned about detecting a single point high level, then you want the on/off version,” Hooper says. “As soon as the sensor sees the product, it will switch the relay and tell the machine what to do.”

For a more completely automated system, Rechner offers a min-max (pump in/pump out) model. The unit is connected to two sensors that are placed at low-level and high-level points in a tank. When the level in the tank drops below the minimum sensor, the relay will energize to start a pump or a motor.

It will remain energized until the tank has been filled to the maximum sensor. At this point, the relay will de-energize and stop the filling process.

It will remain de-energized until the level drops below the minimum sensor again. The cycle then repeats to keep the tank filled. This model simplifies a complex task without the need to hire a PLC programmer.

World Leaders
Aside from logic controllers, Rechner is known for its innovative level-control sensors. “We are considered a world leader in capacitive sensors,” Hooper says. “We really focus and specialize in that technology.”

Rechner’s high performance capacitive sensor line is designed for applications that require greater sensing distance, have high temperature variations, a high potential of electromagnetic disturbances or the material has variations.

“We have a number of patent technologies based on the shape and size of the sensors that lets us do things that no other companies can do, like our 3-electrode technology,” Hooper says. “It can sense 10 times the distance of standard capacitive sensors.”

The company’s 26 Series of capacitive sensors has unique physical characteristics in shape and size that allow it to outperform any traditional sensor when it comes to ignoring material buildup.

“Our sensors can ignore the buildup and still switch on and off reliably,” Hooper says.

For applications where an extremely high or extremely low temperature rating is needed, the KS Series operates between -328F and +482F. That is an operating temperature between liquid nitrogen and the temperature of standard cooking equipment. This sensor can go where most other sensors can’t.

Finally, the company’s KXS Series, another member of the 3-Electrode family, can sense distances of 10 times of those of standard capacitive sensors.

This allows detection of faraway targets, or targets that have very low dielectric properties, like foam packaging pellets. This series can also reach high temperatures up to +482F by choosing metal and PTFE housing materials.

“Technology is what we do best,” Hooper says.