Skip to content
You are here:Home » Scoutwest Inc./Standard Time
Packaging 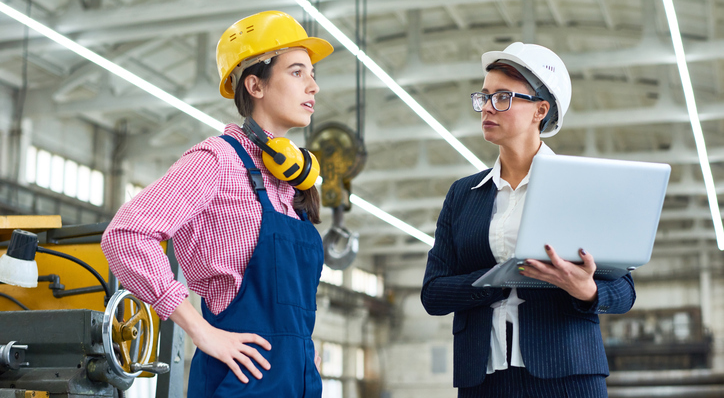 Users of Standard Time manufacturing resource planning (MRP) software start seeing results mere hours after deployment. “We’re not the so-called ‘million-dollar’ implementation you spent 24 months deploying, only to learn that production actually went down 20 percent during that time,” says Ray White, president and founder of Scoutwest Inc., the software’s manufacturer. “We’re the hardcore minimalists – you either get immediate results, or we’re going to find out why.”

“We’re expecting real, actionable data from the shop floor on day one, and expect supervisors to get instant notifications of factory floor anomalies and incidents,” he adds. “We want project managers to slot twice the jobs they once could because they’re seeing more relevant data, and we’re expecting actionable data for continuous improvement from a strategic perspective. Yes, you can get all that from the ‘million-dollar’ implementation, but you had better know what you’re doing, because none of that comes as naturally as it does with Standard Time.”

Standard Time begins collecting data like time spent on projects, the number of work orders active and work in progress the same day as installation. The software also allows manufacturers to track work orders, employee status, project status and inventory. “Our implementation is simple enough that you can start at 8 a.m., begin using Standard Time by noon, and by 4 p.m. you will have changed your whole way of thinking about the shop floor,” White says.

Manufacturers also can use the platform as a continuous improvement tool. “You can plan and slot jobs for production and then collect actual time and materials off the shop floor,” he adds. “Now that you have actual data, you can implement cycles of measurement and improvement.”

Go with the Flow
Standard Time collects data acquired by barcode scanning guns. Barcodes used by the program are readily available online and can be printed using any standard printer. After a barcode is scanned, data is sent to a server, where it is instantly available in dashboards within the program. “I call it a river of data – it’s a huge flow of information coming to the server from the shop 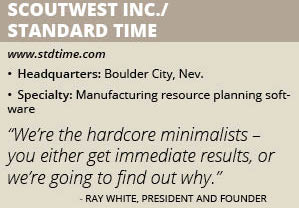 floor,” White says. The Standard Time platform is available as either an on-premises or cloud-based program.

A wide range of manufacturing operations can use Standard Time. “Engineering, manufacturing shops, bespoke made-to-order shops, fabricators and custom manufacturers all use [the program]. We also have traditional manufacturers with repeatable products, assembly lines and packaging and ship facilities,” White says. “But most, the kinds of people using Standard Time are those with some engineering discipline behind the actual production – mechanical, electrical, software and even civil engineers.”

The program’s customers include small welding fabricators as well as producers of pharmaceuticals and medical devices. “These are shops with a strong human influence on production results,” he adds.

Standard Time benefits users in several ways. “Margins in western manufacturing are shrinking, and manufacturers know they had better automate with intelligent agents or they may not be around long,” White says. “Nobody wants to lay somebody off, so manufacturers find ways to trim a few percent here and there or even fundamentally reconfigure their whole shop.

“Their gut tells them there are inefficiencies, but they don’t readily recognize them. We come in with automated shop floor data connection, and instantly the lights go on,” he adds. “[Companies] suddenly realize how much they’re spending on employee time tracking alone, and that’s when their guts melt down and they realize something has to change.”

One user, a custom woodworking shop, used Standard Time to dramatically improve its processes. “The place was a mess – workers shouted job status across the shop floor over the roar of planers and routers. Paper timesheets were filled in on Friday afternoons with only vague guesses of what actually happened on Monday and Tuesday, and all project planning and job slotting was done verbally,” White says. “We came in with work orders, task lists, resource assignments, resource allocation that updated instantly as jobs were dragged across the Gantt chart, and barcode shop floor data collection. I was not privy to the percentage of time saved, but I’m guessing it was substantial because they keep coming back for more.”

Rise of the Bots
White founded the company in 2000 after previously working in engineering and software development for several different companies. “I’m sort of a serial entrepreneur, self-started, self-directed kind of guy,” he says. “I have a long geek history, starting in the 1970s building computers with chips from a new company [at the time] called Intel.”

The Standard Time system in the next several years is expected to evolve to meet the rapidly changing nature of manufacturing. “Manufacturing is going to fundamentally change in the next 20 years. Disruptive technologies are offering leapfrog opportunities for western manufacturing, and one of those is [artificial intelligence] AI,” White says. “In 20 years, Standard Time will integrate AI into every project management and resource planning feature our clients use today.

“[Users] will have a beehive of little intelligent bots looking out for them. Just like with self-driving automated cars, you’ll soon learn that AI bots sometimes make better choices than human beings and you’ll come to trust bots with every aspect of the manufacturing process,” he adds. “We think that will make Standard Time a pretty interesting choice in MRP tools.”