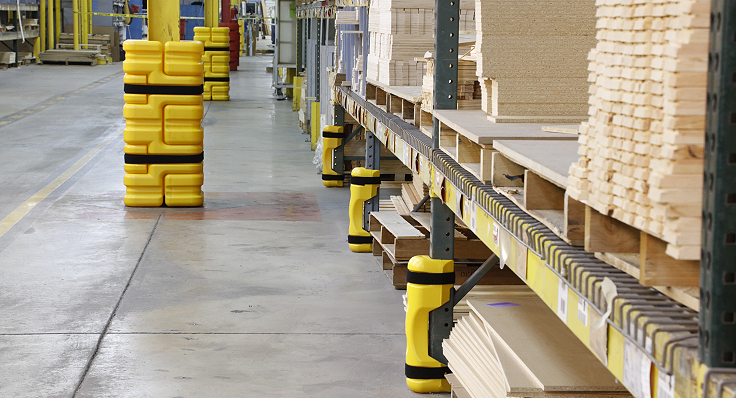 Sentry Protection Products sells collision protection and collision warning products for industrial uses such as in warehouses or parking structures because, after all, accidents will happen.

“People make mistakes,” owner James Ryan says. “When you have an accident [with our products] you don’t do damage or it’s minimized. That’s been the appeal of our product for 20 years.”

Preventing or minimizing damage means saving money. “Initially we found safety was great but if you save money with the product, it was a lot easier to sell,” Ryan says. “If you can prevent a building column from being destroyed, you can save $5,000 or $10,000. Building management companies wanted [our products]. They would suffer the consequences if they didn’t have protection.”

Sentry started with the Column Sentry, a protective device for building and parking lot columns. Over time, the company has come up with ideas for several other products.

“We started with column protection,” Ryan says. “Then we saw issues with pallet racks. From there we found that corners need protection. Every few years we come up with something new because customers told us.” The Rack Sentry, for example. “We visited customers who had columns,” Ryan says. “They had five or 10 columns but they had thousands of upright racks. The customer asked if we had something for that. If you have a forklift in a warehouse or manufacturing facility, you need one of those products.”

Other products include the Collision Sentry that warns forklifts or people going around a blind corner that something or someone is coming their way. The company also offers a Park Sentry to protect columns in a parking garage.

Bright Idea
Sentry Protection Products started when a contractor approached a building products company where Ryan was the marketing manager. “We had this customer bring us this idea,” Ryan recalls. “He was a contractor putting up a building. He said, I’ve got this issue. His customers would say he has to replace a building column because it got run into. He was normally too busy to help.”

The contractor came to Ryan’s building products company and asked if it would like to sell the product he had designed. It did but it took a while to find the right market. “At the time we were selling it to contractors in the United States,” Ryan says. “It didn’t go over well. We then took the idea and sold it to end-users [building managers].”

It worked. Sentry Products was spun off from the building materials company in 1998 and in 2010 Ryan bought it.

Over time the company began advertising in magazines dedicated to building maintenance professionals and building engineers, attending trade shows and setting up a network of resellers. 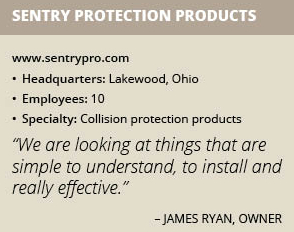 Better Quality
“We’re the first and a better quality product,” Ryan says of the competition. “When you design a product to solve a customer’s problem, you look at the problem. When you are the second or third or fourth manufacturer coming in, you see what corners you can cut. We have competitors but none has captured the sort of quality that we brought to market. They are typically lower-quality knockoffs.”

New Ideas
Sentry has two challenges. The company contracts out manufacturing and those manufacturers have difficulty finding labor. “We are limited [in production] by the labor shortage,” Ryan says.

But the larger challenge is explaining its products to potential customers. “Some of what we do are still new ideas,” Ryan says. “It’s not like going to a hardware store to pick up some screws. We have to get in front of people to teach them.”

About five years ago, Sentry stopped sending out its own employees and instead began working with manufactures’ representatives that collect a commission and typically represent multiple companies.

“While someone is talking about a guardrail, why not have them talk about protecting their columns or pallet racks?” Ryan says. “It’s been very effective for us. The local representatives have been terrific for us. We just couldn’t get the coverage before.”

Cornering the Market
“It’s been a very good few years, the last three years,” Ryan says. “2018 was terrific. We are very optimistic on our outlook.”

Part of that optimism is due to the recently introduced Collision Sentry, a warning device placed at blind corners. “If you are driving a forklift and someone is around the corner or on the other side, it warns them,” Ryan says. “It’s better than a mirror. The product has been out for four years and every year [sales] keeps growing and growing.”

In 2018, Sentry revised its initial product, the Column Sentry. It used to sell Column Sentries in eight different sizes. The new version comes in two sizes but is adjustable. “The only thing the customer can do wrong is to order the wrong size,” Ryan says. “We said, ‘How could we take away that problem?’”

For the future, Ryan says the company is looking to adapt its collision warning products for non-industrial uses. “Maybe in hospitals,” Ryan speculates. “Anywhere you see a corner. We are looking at things that are simple to understand, to install and really effective products that will help customers.”