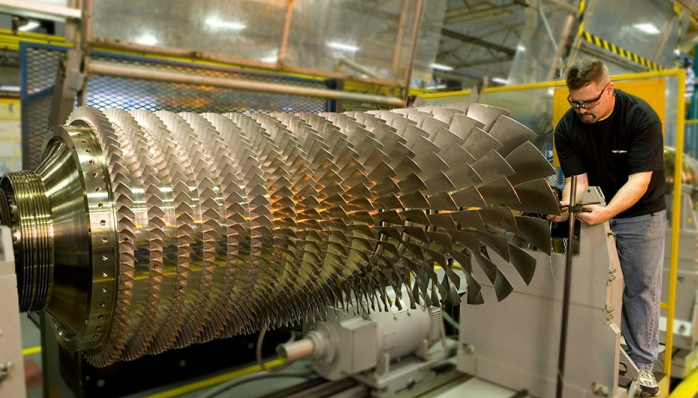 Solar Turbines must earn the right to win every day. The gas turbine and compressor manufacturer competes against giants such as General Electric and Siemens. To survive, it has to deliver products and packages in a value-added way that answers one key question: “Why should our customers choose us over another solution?”

For Market Development Manager Chris Mellos, the answer is Solar Turbines’ ability to adapt to new market environments and take thoughtful action that enables its customers to succeed. “We take pride in our customer relationships and listening to them about what we can do to make them better,” he continues. “If we lose focus on our customers, we’ll start to see a decline in customers who purchase our solutions.”

Complete Solutions
Solar Turbines began in 1927 as the Prudden-San Diego Airplane Co., a manufacturer of all-metal airplanes. It only produced three planes before the Great Depression hit in 1929 and it changed its name to Solar Aircraft Co. and started making components for other airplane manufacturers.

During World War II, it became a defense company, making more than 300,000 exhaust manifolds for American aircraft and developing high-temperature components for the nation’s earliest jet engines. Following the war, Solar Aircraft developed and manufactured gas turbines for the Navy. In 1960, the company began production of the popular Saturn gas turbine, versions of which are still being made today.

The Saturn had become so widespread in industrial applications that by 1973 the company decided to leave the aircraft industry to focus on industrial gas turbines, turbomachinery systems and support services. Its success drew the attention of larger companies and since 1981 it has been a wholly owned subsidiary of Caterpillar. Today, the company claims to be the world’s leader in industrial turbines up to 30,000 horsepower and it has sold more than 15,000 gas turbine systems to customers in need of reliable power and compression systems on land and sea.

Solar Turbines’ products are used in in a range of applications from power plants and manufacturing facilities to offshore oil rigs and natural gas-drilling sites. Its gas turbines are classified into two categories: generator sets and compressor sets. Generator sets are used to provide remote power to industrial facilities; compressor sets are designed primarily for natural gas production, processing and moving gas through pipelines. Within those areas, Solar Turbines offers several supporting products, upgrades and services.

Those additional products and services differentiate Solar Turbines from other gas turbine manufacturers. The company offers not only the turbines themselves, but everything that goes into supporting their operation, from fuel filtration skids to operation and maintenance contracts.

“Certainly the last five years have been more of a strategic change in direction from just concentrating on gas turbines, which is our core, to expanding into other areas of power solutions,” Mellos explains. “The business is looking for us to be more of a solution provider than a product provider.”

Those expanded solutions include complete construction services. On jobs that involve the installation of turbines, Solar Turbines can take on a role similar to a general contractor responsible for the entire project scope. The company is capable of designing and engineering the facility, procuring materials, fabricating equipment and components, performing quality control checks, setting schedules, managing the budget, coordinating shipping and commissioning work.

Because it acts as a single point of contact for the client, Solar Turbines simplifies the construction process and takes on all the accountability. “The mantra we’ve been preaching is ‘One throat to choke,’” Mellos says. “So, if a customer has a problem with our solution they can come to us instead of pointing the finger at three or four sub-vendors.”

Providing those complete solutions is the key piece to Solar Turbines’ growth. “We recognize that our customer base is looking at us for more than gas turbines and compressors,” Mellos notes. “They want us to take ownership over complete solutions. By doing that, we’re going to grow because we’re getting into new areas we haven’t before.” 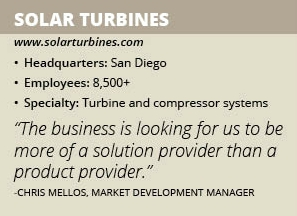 Solar Turbines operates 65 field offices around the globe and employs hundreds of field service representatives who can provide expert technical assistance for any issue relating to its turbines or compressors. It’s an impressive amount of manpower that gives Solar Turbines the ability to respond 24/7 to a client located anywhere in the world. “If you have a problem with your turbine you can call us and we’ll usually have somebody there in a day to provide the service you need,” Mellos says.

The customer service network is broken down into regions and districts within each region. The Western U.S. Region, for example, comprises everything in the United States west of the Mississippi River, and includes four districts, each with its own manager and team of field service representatives dedicated to customers in that district. “That’s what we’ve invested in over the years and it’s given us a competitive advantage, to say the least,” Mellos boasts.

Predicting an issue and solving it before it causes downtime is critical to oil and gas operations.  To that end, Solar Turbines offers equipment health management, a service that combines remote monitoring sensors with the InSight System platform to diagnose and analyze equipment operating conditions.

Equipment health management is proactive. It looks at how the performance of the turbine or compressor is trending and alerts the customer if there is a step change in a certain parameter. A person can then take a closer look at the system to determine whether the anomaly was a one-off issue or the beginning of a trend that needs intervention.

Field service representatives are great for fielding questions or repairing systems when they break down, but quality control begins at the factory – long before a service call is ever placed. Solar Turbines is constantly investing in the capabilities and processes at its two manufacturing facilities in San Diego to ensure the solutions delivered to customers exceed expectations for reliability and performance.

Seeking Sustainability
Gas-powered turbines have been a reliable source of energy production for more than a hundred years, but manufacturers such as Solar Turbines have taken steps to address sustainability as energy users become more environmentally conscious. The company produces low-emitting turbines that utilize pollution prevention combustion technology, and it is a member of the EPA’s Combined Heat and Power Partnership, a group that aims to reduce air pollution and water usage associated with electric power generation. “We’re definitely focused on sustainability,” Mellos says.

Those steps have helped to reduce emissions, but Solar Turbines’ latest solution will tackle the other side of the equation: energy waste. When a gas turbine generator set is in operation it constantly generates power, sometimes in excess of what can be consumed by the immediate application. In the past, that extra electricity was wasted. However, Solar Turbines has introduced an energy storage solution that can capture that excess power generation and save it for future use.

The fuel sources powering Solar Turbines’ equipment are also expanding. The company’s primary business has always been natural gas turbines and compressors but it also offers an electric motor driven (EMD) compressor solution in situations where the customer needs to reduce emissions to qualify for permits. However, demand for electric-powered compressors has increased, leading Solar Turbines to release this year its first standard product for EMD solutions: the Spartan.

With the addition of the Spartan, energy storage and modular offerings, Solar Turbines has significantly expanded its energy solutions portfolio.

The Spartan line is an example of how Solar Turbines’ customers influence the development of new products and solutions. It began as a custom option to solve specific emissions situations but became a full-fledged product line over time. “We prefer to sell a standard pre-engineered product without having to do customization,” Mellos says. “But at the same time, we understand there may be unique needs in the marketplace our standard may not fit with.”

The latest innovation to come from customer requests is Solar Turbines’ mobile power units. The company has had turbines with limited mobility for the past 15 years, but with the increased activity for oilfield services in the hydraulic fracturing and drilling markets many customers require a more flexible solution. Once a well is drilled, fractured and production begins, the power requirements are greatly reduced and a permanent gas turbine becomes unnecessary.

To better accommodate the market, Solar Turbines is developing a system that places a gas turbine on wheels so that it can be easily moved from one drill site to another. “We understand that not every installation is a permanent installation,” Mellos says. “We are working with customers to develop more deployable and modular solutions.”

Market Shifts
Like many businesses with ties to the oil and gas industry, the decline in oil prices in 2015 created challenges. Oil producers cut back on capital spending, which sent ripples throughout the industry, affecting investment in the kinds of midstream projects that Solar Turbines was involved with. To manage the downturn, the company reduced costs and prepared for the eventual turnaround. That recovery gained momentum in 2017 with oil prices rebounding to more than $50, spurring increased investment. “We’ve gone through a couple of tough years, but it’s bouncing back now,” Mellos says. “We weathered the storm.”

Although the global oil industry has struggled the past few years, Solar Turbines has benefited from the surge in America natural gas production. “In the past, most of our revenue was international, but recently it has shifted back to the United States because the domestic market has been so strong in the midstream,” Mellos says.

The shift toward domestic customers is only the latest in a line of evolutionary periods for the 90-year-old company. Solar Turbines has demonstrated a consistent ability to change alongside its customers and the company is again calling on that skill as it transitions into a complete service provider. “The market right now is certainly in a recovery mode,” Mellos says. “It’s starting to expand again. We’re well-positioned with our products, emissions and technology.”

An early pioneer of industrial automation solutions, Comau is applying its expertise in new and exciting...

With decades of experience in the manufacture of PPE, Globus Group is advancing technology around plastics...