Already receiving bookings for 2022 and beyond, Stolle Machinery Europe offers the food and beverage industry a comprehensive package of services that help turn investments into a reality

Founded in the USA, Stolle Machinery is the world’s leading producer of machinery for can and end manufacture. As part of its global footprint, the company has expanded its operations across multiple continents, establishing offices and 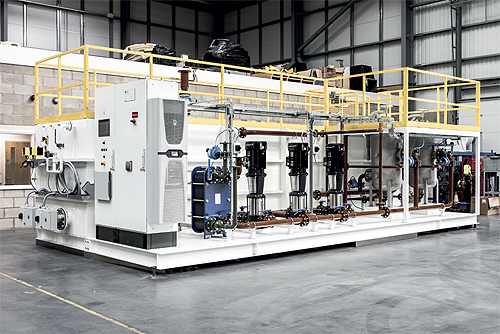 Headquartered in the United Kingdom, Stolle Machinery Europe serves food and beverage canmakers throughout Continental Europe, the British Isles, the Middle East, and Africa. Though the company’s main facility is situated in Carlisle, Stolle Europe has an additional UK location in Altham, as well as another plant in Poland. Led by Executive Vice President Steve Higginson, the company’s success is built upon its unique positioning in the market; with the exception of a palletizer, Stolle Machinery offers every piece of equipment – including conveyance – necessary for a can line, along with design, layout, installation, and commissioning services.

“Stolle Europe provides the organizational Systemglue between the equipment supply and the customer’s requirement for cans,” Steve explains. “When you buy that kind of equipment, somebody has to specify it, plan its placement in a factory, install it, commission it, and then get that process operational. In other words, it’s a bit like buying all the ingredients, but you don’t know how to cook. Somebody has got to turn the ingredients into a finished dish. That’s where we come in. Of course, we do have competitors, but they have to get their equipment from somewhere else, and also, they are not can makers. We have got the can making experience and the end making experience. There is nobody else like us.

“When an independent manufacturer comes to us and says, ‘I want a can factory’, our usual response is ‘how many cans?’ and ‘what sizes?’. If they want a billion cans, we know that they need a 3000 a minute can line and we will then design and install around it. The person requesting the factory more than likely do not have the experience in the industry, but it doesn’t matter, because we can fill in those gaps. In addition to bringing the nuts and bolts of a project – the design, the layout, the utilities you will need and where they should be – we are bringing a wealth of experience that turns someone’s investment into a reality.”

Serving not only as a regional hub for genuine Stolle OEM parts, field service, and complete technical support for can and end lines, Stolle Europe is a hub for three key supplementary groups: Stolle Global Systems, Stolle EMS, and Stolle Conveyance Systems. Acquired over time, these subsidiary businesses now collaborate under the Stolle Europe umbrella. The result is a business that, as Steve suggests, not only offers vast machining and assembly facilities, but also turnkey construction, upgrade, and process analysis services for the can and end manufacturing industry. Traditionally focused on businesses with whom Stolle Europe has already established a relationship, the company’s targeted acquisitions strategy has driven growth and f

“Stolle Conveyance Systems, which was ECI Cumbria, was a company involved in our layout design, so as our systems business grew, the natural progression was for them to become part of the family,” Steve remarks. “EMS – now Stolle EMS – an existing manufacturer of, can washers, ovens, and component machines that were missing in our portfolio. These key can line elements were not manufactured in the US, or Brazil, or Vietnam, or China where our other facilities are, but they were manufactured in Poland and the UK, so it was a natural sequence of events for Stolle Europe to absorb that company too.

“Over time, the acquisitions have led to us become a highly diverse operation,” Steve adds. “There are now many different elements to our business, including the spares and aftermarket activities, which were worth $1 million in 2006, but 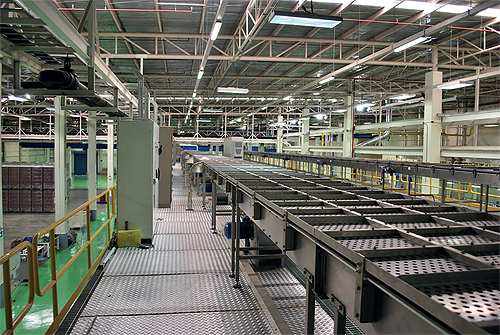 are now in excess $30 million dollars. We have our conveyance business, which is the hardware that conveys a can from one machine to another, and that plays nicely into our systems work, which covers some of the line layouts and design services we offer for factories. We offer a service department and rebuild facilities from Carlisle, and all our sites have equipment build capabilities.”

Supported by investment from its parent company in the US, Stolle Europe benefits from over 60,000 square feet of manufacturing space in Carlisle, where the company produces all its conveyance and has the ability to rebuild various pieces of equipment, including diesets, bodymakers and decorators. Washers are produced in Altham, which is also home to Stolle Europe’s Precision Machine Shop – an innovative site currently working on two R and D bodymakers called The Canceptor and also the launch site for the new Stolle necker.

“Among our recent purchases was a new Mazak turning machine for our Precision site,” Steve reports. “We are very lucky in that we’ve been well looked after by Stolle Machinery in terms of providing investment. There is, of course, a process to go through, but we’ve been kept well abreast of our ability to fund what is an actively growing market.”

Together with the significant financial backing, outside influences beyond the company’s control have also been instrumental in Stolle Europe’s expansion, Steve claims. “As a business in the middle of the supply chain, we’re very much dependent on how our customers perform. Over the last couple of years, demand has been driven by pressure on plastics, causing people to turn to metal packaging as a result. The Covid-19 situation has had an even bigger impact because people don’t want to re-use packaging, whereas metal packaging is single use. It gets recycled, and in some cases, it can end up in the material in a can plant within two to three weeks.

“Changes in people’s shopping patterns has benefitted the company too,” Steve notes. “Shoppers have been buying in bulk because they could only go out once every so often, so two-piece food cans have been popular, but also beer and beverage cans as well because pubs and social outlets have been closed or restricted, and a two-piece can is the best package to keep drinks safe and fresh.”

Though 2020’s Covid-19 crisis has presented Stolle Europe with new opportunities for growth, the company would not have been able to take advantage of the increase in demand were it not for its swift adaptation to new ways of working. Within days of the virus’ outbreak, Stolle Europe formed a crisis management team that quickly agreed to implement safety initiatives above and beyond government recommendations. Meeting daily, the crisis team guided the company through lockdown, ensuring the safety of Stolle’s employees and the long-term health of the business.

“Alongside the implementation of government mandated social distancing and PPE usage, we have been fortunate to avoid any lay off situations and any furlough instances were kept to an absolute minimum. We have also taken additional 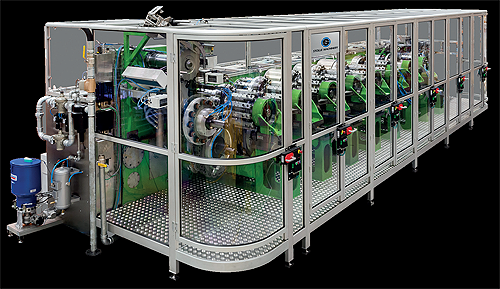 initiatives for the wellbeing of our employees and will continue to do so, as they are critical to our business.

“We’re a global organization and obviously the travel restrictions have had a significant impact on how we do business, but it’s given us a chance to develop our standard operating procedures and that will benefit customers in the future. We’ve provided some technical assistance for clients over video calls, and our global network of offices means we still tend to be able to support customers locally. No matter what, our primary objectives from a crisis management point of view have always been to look after our staff and ensure the survival of the business.”

An industry veteran, Steve’s experience has been invaluable throughout 2020 and has enabled the company’s smooth expansion in a time of global upheaval. Also responsible for Stolle’s Asia-Pacific office in Vietnam. Steve was part of a team in 1995, when the first two piece and end manufacturing facility was installed in Vietnam. Having played a role in a number of landmark industry projects over the years, Steve is ideally positioned to lead Stolle Europe into the future. What will that future look like? Steve cites a factory constructed by Stolle Europe for Quality Pack in Hungary as an example of what the company is capable of achieving.

“It began with an independent manufacturer that already produced their own beverages, wanted to make their own cans,” he recalls. “The result was a pioneering greenfield factory. It was the first two piece can and end plant in Hungary.”

Completed in 2018, Quality Pack was a full turnkey project where Stolle Europe was responsible for providing Systems services that included equipment, full mechanical and electrical installations, startup and commissioning of the can and end lines, production ramp-up, and training of plant personnel. With demand for cans increasing, and projects like Quality Pack earning the company more admirers across the industry, Stolle Europe is preparing for its best decade yet.

“In the next few years, we will be continuing our systems program, as well as integrating the acquired businesses into one big operating model,” Steve declares. “Due to the demand for cans, we expect to see more manufacturing opportunities in the UK in the future, which will create more jobs, so we are currently recruiting. Some of our products are already sold out through 2021, so we are also increasing capacity, both in terms of manpower and space to help provide more, helping us to fulfil customer programs which already seem buoyant into 2023.

“As so many things change, we will remain a people business. We have a wealth of experience across our business groups and strong management teams, that doesn’t make us better people it just means we have different responsibilities. We place great value on the input of our employees because we are a family as much as anything.”