Taylor’s father, Paul Taylor, founded his namesake company in 1955 as a manufacturer of dampers for the aerospace industry at a time when commercial aviation was just becoming popular and the space race was getting started. The company found early success but Paul Taylor realized he needed to diversify into the commercial market to reduce the risk of market fluctuations and ensure he would never be forced to lay off workers.

In the early 1960s, Taylor Devices launched a line of large energy absorbers for overhead cranes in steel mills. The absorbers acted as a crash protection system for the buildings so that in the event a crane got loose and struck the structure, the building would not collapse. By the early 1990s, the commercial side of the company took the technology it had developed for steel mills and spacecraft and began manufacturing seismic dampers to earthquake-proof buildings and protect high-rises from strong winds. 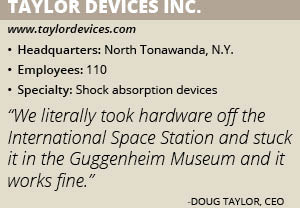 Those dampers now make up half of Taylor Devices’ overall business and have been installed on high-profile projects such as the Facebook headquarters in San Francisco, the Park Tower Hyatt in downtown Chicago and the Guggenheim Museum in New York City, the latter of which uses a hermetically sealed damper to protect priceless artwork from the shock of passing trucks and fury of hurricanes. “We literally took hardware off the International Space Station and stuck it in the Guggenheim Museum and it works fine,” Taylor says.

The other half of Taylor Devices’ business remains the aerospace market. The company fabricates components for aircraft landing gear, isolators for naval computers and parts for military weapons systems that Taylor can’t talk about. “We go all the way from space down to undersea,” he says. For its contributions to the Apollo, Orion and space shuttle programs, the Space Foundation even inducted Taylor Devices into the Space Technology Hall of Fame in 2015.

The wide scope of those applications is made possible because Taylor Devices continuously builds on knowledge gleaned from the products that have come before. It’s the kind of experience that’s only found in a longtime manufacturer with tenured employees.

Taylor himself started working at the company as a teenager and has filled roles in every department over the years, developing a comprehensive understanding of every facet of the business before becoming CEO in 1991. “The joke I have is I’ve done every job here so don’t try to tell me something about your job I don’t know already,” he says. “If [customers] have an issue, between myself and a few other people who have been here almost as long as me, we can fix almost anything.”

Customers from all over the world rely on that expertise. To keep up with demand, Taylor Devices opened a second manufacturing facility in its hometown of North Tonawanda, N.Y. in 2011. Machining equipment was moved to the new location while testing and offices remaining at the original facility.

Last year, Taylor Devices completed a 10,000-square-foot addition to its original headquarters that allowed it to make even larger dampers. “The [building] codes have gotten to the point where many significant projects require dampers that are 35 feet long,” Taylor says. That was five feet longer than the company could previously accommodate, so it had to dig out a 20-foot-deep, 20- by 30-foot hole to create more assembly space. Now, the facility can assemble dampers up to 45 feet in length, providing even more strength and stability for customers’ structures. “They keep making the earthquakes bigger,” Taylor jokes.

When fabricating critical, life-saving devices such as shock absorbers and dampers, quality is paramount. If a device fails it can compromise safety, which is why Taylor Devices performs extensive evaluations on every product and follows AS9100 quality standards. “We don’t ship anything out the door unless it’s been tested to full capacity,” Taylor says.

Taylor Devices promises to continue that legacy of innovation for years to come. The company is working on a modular panel damper that can be used with wood-frame houses to provide enhanced earthquake resistance. It’s also developing a new range of dampers for retail spaces on the ground floors of mixed-use buildings, which tend to be structurally weaker than upper levels because of the large storefront windows.