The customer is No. 1 at Teradyne Inc., Senior Director of Global Operations Steve Petter says. “That would be one of the values that comes through here everywhere,” he says. “If you don’t have the customer’s interests at heart, you’re not going to get very far.”

Based in North Reading, Mass., Teradyne provides equipment for testing semiconductor chips. Founders Alex d’Arbeloff and Nick DeWolf initially met at the Massachusetts Institute of Technology in the late 1940s, but reconnected in 1960 with plans to start their own company.

The two developed a way for electronic components to be tested using automation, which eliminated the bottleneck that was encountered with manual labor. In 1961, the company sold its first product, the D133, a logic-controlled go/no-go diode tester, which helped increase production.

Five years later, the company introduced the J259, an integrated circuit tester. It was the first to use a minicomputer to control a series of test steps, and started the automatic test equipment industry.

Over time, the company added more products and grew through acquisitions, including the purchase of Nextest and Eagle Test Systems in 2008, which served the flash memory test and high-volume analog test markets. This grew Teradyne’s presence in the semiconductor test business.

Today, the company stands as a leader with 47 percent of its market, Vice President of Corporate Relations Andrew J. Blanchard says. “We’re also a major supplier of circuit board test equipment, hard disk drive and SSD testers, and products that test the wireless performance of cell phones and other wireless products,” he adds.

Teradyne has thrived, he notes, because it works very closely with clients to understand their test requirements and can project future market trends. “The result has been a steady flow of new products that deliver the lowest test costs and the shortest time to market for our customers’ products,” he says.

“Our customers include almost all of the chip makers and electronic assembly companies in the world,” Blanchard says, noting that sales of its semi-conductor test products comprised 73 percent of its business in 2015.

Teradyne’s recent acquisitions include Universal Robots (UR) in Odense, Denmark. “UR is the leader in the nascent collaborative robot market, a $100 million market in 2015 that is growing at 50 percent per year,” he says.

“Collaborative robots are robots that are safe to work with … and easy to program,” he continues. “The collaborative market has been forecast by third-party analysts to grow to over $3 billion by 2020.”

Teradyne has earned client loyalty with reliable products, Petter says. “You can almost think of our products as a calibration room on wheels,” he says.

“Every signal they test is traceable to NIST [National Institute Standards and Technology] standards,” he says. “They can count on that reading that they’re seeing.”

Its clients also can count on them to be efficient. Many equipment companies, Petter says, have backlogs of chips that need to be tested.

“Our tester needs to hit that production floor and start testing,” he says. “If they lose a day, they could lose a quarter of $1 million, depending on the chips.” 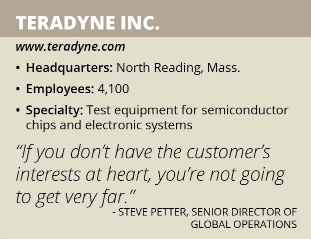 It also has its own people stationed at the location. “There’s seven engineers that work for Teradyne that are at the site in China,” he says. “We also have a footprint in Suzhou at the factory.”

He adds that Teradyne has worked with Flextronics since 2003. “They’re superb,” he says, noting that the two firms did encounter challenges over the years. “[But] we’ve worked out a lot of the problems. Personally, I’ve spent over two years on site in increments over the 13 years we’ve been there.”

The Suzhou site is “a very smart factory,” Petter says, noting that it measures quality by cycle time. “You can go to several stages of the work flow and you can tell which process steps are performing [well] and which ones are struggling.”

Movement is key to the process, Petter says. “If it’s not moving, there’s got to be a problem somewhere,” he continues, noting that the company watches the process via LED monitors. “That’s a big component to the improvement work on our processes.”

But Petter asserts that Teradyne is pleased with work at the Suzhou site. “They’re starting to perform and improve on their own,” he says. “That’s [our] goal with the contract manufacturers.”

Teradyne also utilizes Plexus Corp. in Penang, Malaysia. Although the partnership is relatively new, Teradyne expects the company to learn how to manufacture one of its newer products even faster, Petter says.

“We’re starting with a more advanced group,” he says. “Malaysia also has been doing more complex products for years.”

As Teradyne trains Plexus’ workers, “We’re watching every step of how they behave, how they think and how they operate,” he continues. “There’s a lot of training at the technical and planning level.”

Teradyne makes sure to inspect its products before they reach the end customer, Petter says. “We check it out as the customer is going to use it,” he says. “There are a million tests we perform.

“With 350,000 components in a big system, you have a lot of opportunity for failure,” he says, noting that the company continues working on new tests.

But Teradyne does not stop tracking quality after the product is sold. “We track the installation results and have a closed loop system with the field installers,” he says.

The company also checks with the client to see if they are satisfied. “If our solutions don’t fix that particular problem, we insist [that we] fix the problem, plus the process that let you down,” Petter says.

Petter joined Teradyne 35 years ago and says the evolving nature of the business has kept him engaged. “It’s a different company than it used to be,” he says. “The technology changes and the people here are some of the smartest people in the world.”

One case where the company’s employees made him proud was when it reduced the length of the manufacturing process for the UltraFLEX test system, its premier product line. At the time, Teradyne had not yet sourced out its manufacturing and the process lasted five weeks.

With engineering change orders coming in on a weekly basis, the company needed to shorten the process to avoid bottlenecks. “We used a lot of lean principles and decoupled parts of the process,” Petter recalls.

This allowed Teradyne to cut the length from five weeks to one. “So [we managed] an 80 percent cycle time drop,” he says, noting that it also allowed the company to open up more floor space. “We had less tooling and less inventory.

“Eventually, we outsourced that product line,” he recalls. “That was the precursor to [simply] teaching it to somebody else.”

He predicts a strong future with Teradyne’s team, as they take on more challenges. “My teams always have a plan B, so if plan A doesn’t work, they can still achieve their goals,” he says.